Amid Triston Thompson’s cheating rumours, Khloe Kardashian was recently sharing a slew of cryptic quotes on her Instagram stories. Read on to know more


Amid Triston Thompson’s alleged cheating rumours, Keeping Up With the Kardashians star Khloe Kardashian was recently seen sharing a slew of cryptic quotes on her Instagram stories. She took to the social media platform to repost a collection of quotes that revolved around ‘guilt’ and ‘staying positive’ on Monday, April 26. This comes just a few days after model Sydney Chase alleged that she had a romantic entanglement with Khloe’s boyfriend back in January 2021.

According to OK! Magazine, the now-vanished Instagram story revolved around guilt over past actions. “No amount of guilt can change the past and no amount of anxiety can change the future,” read the entire message. In another story, Khloe reposted a tweet about how important it is for one to invest in their environment and energy as it has a direct impact on one’s life.

The tweet reportedly articulated, “Invest in your energy, invest in your environment. Your environment has a direct impact on your life, so be intentional with it. Surround yourself only with people who can contribute to your growth and expansion. All energy is contagious”. Now, on Wednesday, April 28, Khloe has shared another cryptic quote about kindness by Sonia Sabris. It states, “People who don’t hesitate to share a kind word or do a good deed to brighten up someone else’s day are the best kind of people”. Take a look at the story below:

READ | Khloe Kardashian opens up about body image struggles: 'Make sure your heart is happy' 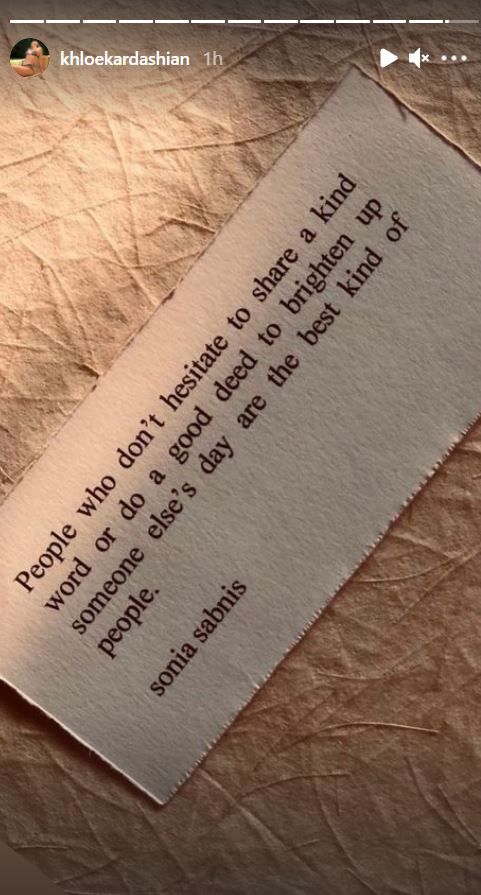 The reality TV star’s action comes days after US Weekly reported model Sydney Chase made some shocking revelations about her relationship with the Boston Celtics player. The model alleged that Triston told her that he wasn’t in a relationship with anyone before taking her on dates. She claimed that they hung out and went out together on multiple occasions and whenever she asked about his relationship status, the player always would insist that he is single.

READ | Khloe Kardashian shares pic with her sisters, says gang is back "with full effect"

Triston and Khloe Kardashian previously broke up when the former was engulfed in a cheating scandal with Kylie Jenner’s best friend Jordyn Woods. After a long break, the duo reconciled with each other, and now cheating rumours have surfaced again. However, neither Khloe and Triston have officially responded to Sydney Chase’s allegations as of yet.