Lil Nas X's Montero video was dropped on March 26 and Twitter could not keep calm about it. Twitterati has appreciated the queer depiction in the video.

Rapper Lil Nas X's latest music video Montero (Call Me By Your Name) is making a lot of noise on social media. The video has also raised eyebrows and is earning appreciation from viewers for its openly homosexual portrayal and consumption of drugs. The music video is set against the backdrop of several scenes from the Bible and the Greek era and showcases Lil Nas X divulging details of his sexuality as well.

Lil Nas X's Montero video starts with the rapper sitting under the tree of knowledge and playing the guitar. A snake from hell is slithering around the same tree and he entices the rapper. The snake seduces him using hypnosis. The next scene opens with Lil Nas X chained and standing in a Greek stadium wherein the audience is shaming him for his sexuality. One of the people sitting in the stands also throws a rock at his head that kills him instantly and his soul is seen leaving for heavenly abode. But he stops midway and pole dances his way to hell instead of going to heaven.

Here, the devil is seen sitting on his throne with a neutral expression on his face. The rapper gives him a sensual lap dance and also tries to seduce the devil. In the end, he gets behind the devil and snaps his neck. He also takes the devil's crown and wears it and he grows a pair of wings as well.

Lil Nas X's video was dropped on March 26, 2021, and has garnered over 7.9 million views already on YouTube. Viewers have appreciated the rapper for the openly gay depiction and finally breaking stereotypes. Many of them have also lauded the use of graphics in this video as that has helped connect many concepts and drive the message of this video home. See their reactions below: 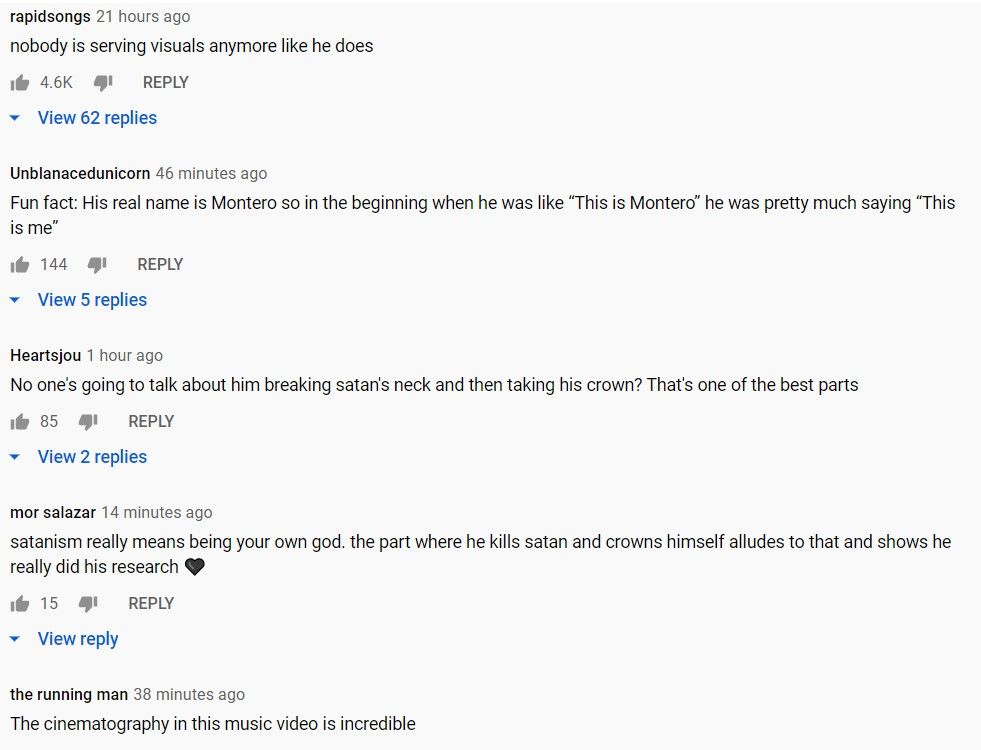 This music video also set Twitter abuzz as people thronged to the micro-blogging site to share what they thought about it. One of his fans has said 'Lil Nas X taking over for Satan in #MONTERO Call Me By Your Name' while another wrote, 'the music video to Lil Nas X’s Montero (Call Me By Your Name) is the most gorgeously subversive and proudly queer music video I think I’ve ever seen and this is how I felt the entire time'. See the tweets below:

Lil Nas X taking over for Satan in #MONTERO Call Me By Your Name pic.twitter.com/hkJ2OoSvTm

CHRISTIANS: Lil Nas X ascends to heaven and it's said he doesn't belong there he descends to Hell ðŸ”¥ and saduce Devil and kill him to take thrown! He is more Dirtier than Devil Himself
Lil Nas X- Montero (Call Me By Your Name)â¤ï¸ðŸ³ï¸‍ðŸŒˆ pic.twitter.com/2lNpKNvioU

Lil Nas X is unfazed, as he takes a stripper pole to hell in new 'Montero (Call Me By Your Name)' music video, to grind Satan

You call it a sin? #LilNas says in the video which is about his sexual orientation that "I'm not fazed, only here to sin" pic.twitter.com/DbphmJ0p7o

I think an editor is gonna let me GO AWF about it but perhaps the most genius thing about @LilNasX's "MONTERO (CALL ME BY YOUR NAME)" is his appropriation of the eponymous white, delicate and conservative film into something black, ribald, and abject and fully in his image.

the music video to Lil Nas X’s Montero (Call Me By Your Name) is the most gorgeously subversive and proudly queer music video I think I’ve ever seen and this is how I felt the entire time pic.twitter.com/wQnN54WAPG