Megan Fox dared to go bare in a sexy Mugler dress with a bedazzling thong underneath, a pair of Jimmy Choo pumps, and Lorraine Schwartz jewels. 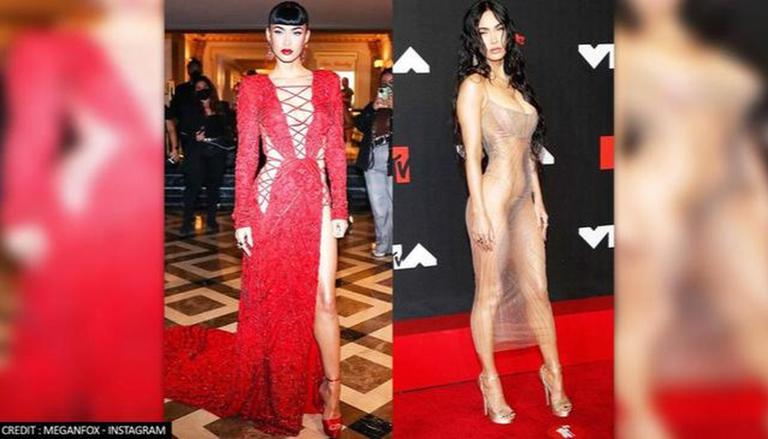 
The MTV Video Music Awards 2021 red carpet saw the boldest looks by the biggest celebrities from the industry on Sunday, September 12 at the Barclays Center in Brooklyn, New York. However, the hottest couple of the night was Megan Fox and her musician boyfriend, Machine Gun Kelly. The actor walked the 2021 VMAs red carpet with her boyfriend and dared to go bare in a sheer Mugler dress.

Megan Fox arrived in a completely sheer custom Thierry Mugler dress which was styled by Maeve Reily. Both Machine Gun Kelly and Megan shared pictures of their looks on Instagram, which went viral in an instant. The 35-year-old actress wore the nude dress with a bedazzling thong underneath, a pair of Jimmy Choo pumps, and Lorraine Schwartz jewels. Her dress was designed by Mugler's current creative director, Casey Cadwallader.

Megan's idea of women's representation however did not go down well with netizens, who questioned how such a look would prevent society from misrepresenting women. 'This is the epitome of contradiction,' a Twitter user wrote, reacting to Megan's caption.

Netizens try to find the logic behind Megan's dress

This is the epitome of contradiction..

She doesn't even know what those words mean.

Can she bother to tell us how so?

America is a confused country

Oh so now she wants to be objectified LOL!!!!

Finding reasons to move around naked ..

On Monday, the superstar turned heads at the annual Met Gala 2021 where she wore into a red-hot lace-up beaded gown with cutouts through the middle and waist with a high slit. The theme of this season's Met Gala was "American Independence" and Megan Fox, who appeared in a thigh-high slit ensemble jazzed up her look with some sparkling pieces of jewellery and finished it all up with bangs for her hairdo.

Megan Fox enjoys a reputation for making bold red carpet appearances and lived up to the expectations both at the VMAs and the Met Gala. Apart from making fashion statements, Megan Fox is best known for her roles in films such as Transformers, Rogue and Teenage Mutant Ninja Turtles, among others.