Megan Fox hit back at the troll who criticized her for dating musician Machine Gun Kelly who was four years younger than her. Read more 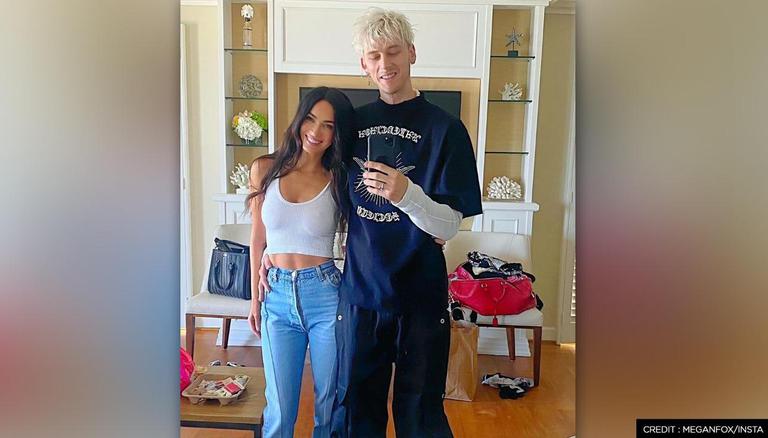 
Megan Fox had befitting to reply to all the trolls that criticize her for dating Machine Gun Kelly who is four years younger than her. The duo began dating in 2020 post Fox's divorce with her husband Brain Green Austin after 10 years of marriage. The couple's relationship has always been under scrutiny ever since they started going out. Megan in the interview said that it was ridiculous how the women were treated.

Megan Fox in a recent interview with Instyle opened up about all the criticism she received for dating singer Machine Gun Kelly. The actress said that "The fact that he's four years younger than me, and people want to act like I'm dating a younger man. He's 31, and I'm 35. Granted, he's lived like he's 19 his whole life, but he isn't 19". She said that this was how patriarchy worked and no one would blink an eye if George Clooney dated someone younger than him. Fox further added that it was ridiculous how women were treated and said, "Four years? Go f**k yourself. We would have been in high school together."

Fox also revealed that people shout things like 'where are your kids?' and 'go back to your kids' every time she's seen on a red carpet or on Kellly's motorcycle. She said that the critics do not ask the same question to the dad, because he isn't the one who is suppose to stay at home and look after them.

READ | Megan Fox wants 'Jennifer's Body' should be made into TV series, says 'I love that movie'

On the work front, Fox was recently seen in the horror thriller action film Till Death, opposite Callan Mulvey in the lead role. The actress played the role of an unhappy wife who wakes up handcuffed to her dead husband at a secluded lake house. Fox will next be seen in the crime thriller Midnight In The Switchgrass opposite Bruce Willis and  Emile Hirsch in the lead roles. Megan's current partner Machine Gun Kelly will also be playing a supporting role in the movie.  Fox will lend her voice for the 3D documentary film Naya Legend of the Golden Dolphins. The story is told by an ensemble cast, including Kate Winslet, Elliot Page, Gerard Butler, James Franco and more.

WE RECOMMEND
Megan Fox reveals her eldest son was bullied for his fashion choices online and in school
Megan Fox wants 'Jennifer's Body' should be made into TV series, says 'I love that movie'
Machine Gun Kelly and Megan Fox's engagement put on hold due to their tight schedules?
Brian Austin Green admits he & ex Megan Fox are on good terms post separation
Megan Fox flaunts neon rainbow manicure to celebrate Pride month