Miley Cyrus mocks articles about her failed relationships and marriage to Liam Hemsworth while singing Kid Laroi's Without You in a new video on Instagram.


Miley Cyrus is yet again making headlines this time by poking fun at the media. The pop star recently took to her Instagram account to share a video in which she seems to be mocking all the articles that have been written about Miley Cyrus' relationship, her exes and her failed marriage to Australian actor Liam Hemsworth. Miley did all this while grooving to Kid Laroi's song Without You.

In the video, the Can't Be Tamed singer is seen lipsyncing to her own lyrics from the song while articles about her ex-lovers and relationships are played out on a screen behind her. Through the video, the singer is denoting that she cares less about all the assumptions made by the media and the paparazzi about her. Some of the headlines that the 29-year-old has used in her video read, "Report: Miley Cyrus Drunk Dialing Ex", "Miley Cyrus: All the Men and Women that she has dated" and many more. Check out the video below.

Miley's video has gone viral on the internet and has crossed over 1 million views, so far. Lionel Richie's son Miles Richie commented on Miley's post stating, "This slaps". Fans of the singer are happy that she has moved on from her ex and shared that they cannot wait to see this new era Miley. Many asked when is the remix version of Without You featuring Miley Cyrus releasing. Read some of the fan reactions to Miley Cyrus' Instagram video below: 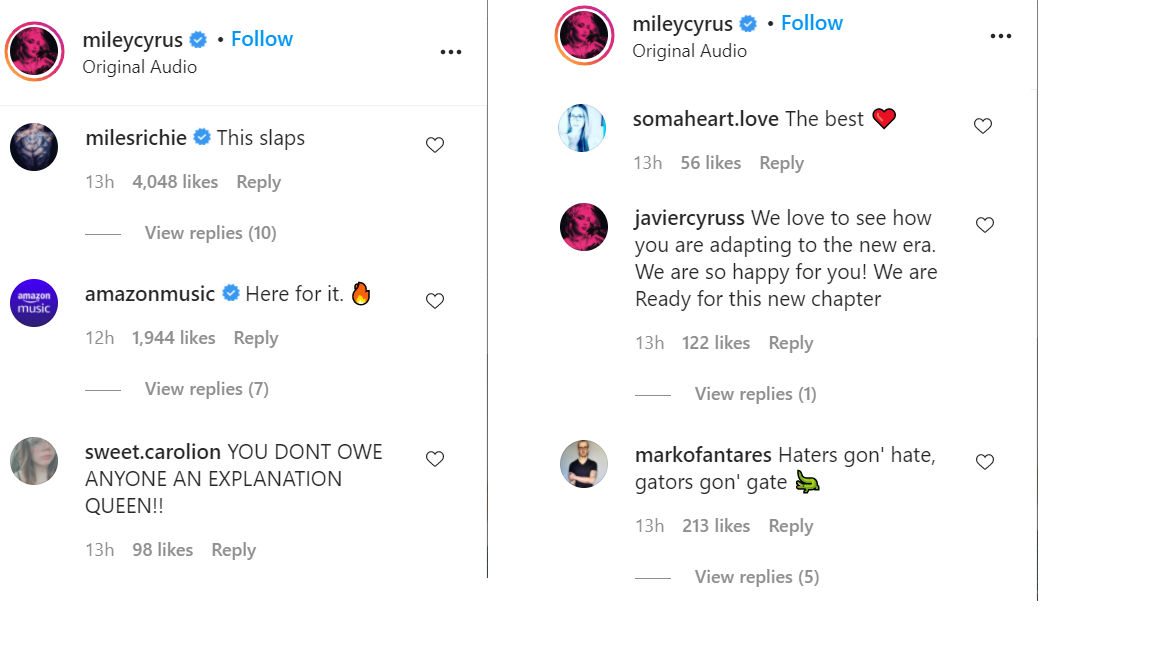 Miley met her ex-husband Liam in 2009 when they were shooting for the movie The Last Song. They had a rocky relationship from the start and had announced their engagement in 2012. However, they broke up soon after but eventually rekindled their romance in 2015. The couple dated for 3 years and finally tied the knot in December 2018. But, they announced their separation a year later in 2019 citing "incorrigible differences" and their divorce was finalised in 2020.

READ | Who is Miley Cyrus' husband? More FAQs like this answered about the pop sensation!
READ | Miley Cyrus feels 'honoured' to join Taylor Swift & Lady Gaga to reach 1 Billion streams
READ | When Miley Cyrus confessed about being a 'really bad driver' on the sets of 'The Voice'