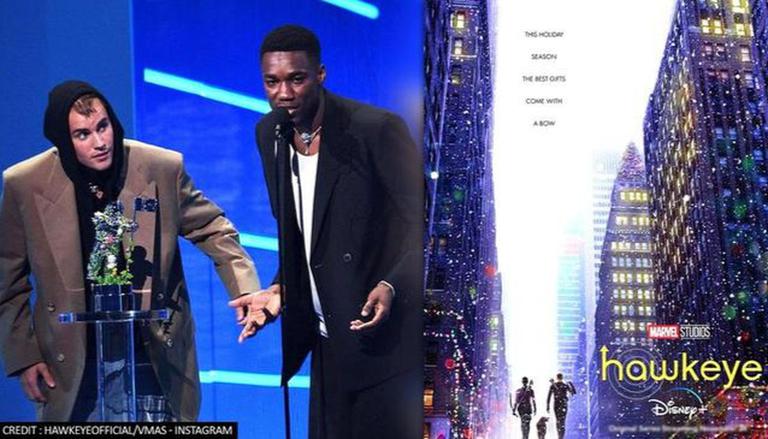 MTV VMA 2021 has managed to create quite a buzz on social media platforms. From its surprise winning lists to glamourous red carpet, the music award ceremony has become one of the top trends on Twitter and other social media handles. The star-studded VMA awards were held at Brooklyn's Barclays Center and was hosted by singer Doja Cat.

The ceremony featured a live audience and stunning performances by passionate artists such as Camila Cabello, Chloe, Justin Bieber, Jack Harlow, Kacey Musgraves, The Kid Laroi, Lil Nas X, Machine Gun Kelly, Rodrigo, Ozuna, Shawn Mendes, Tainy and Twenty One Pilots. VMA Awards 2021 has definitely managed to grab the attention of fans from all over the world with its on and off-stage moments that went on to become the highlight of the music awards ceremony. Take a look at their reactions to MTV VMA 2021. Read More.

Marvel Studios dropped the trailer of their upcoming mini-series Hawkeye starring Jeremy Renner as Clint Barton. The series will also feature Hailee Steinfeld joining him as Kate Bishop/Hawkeye. Hawkeye will start streaming from November 24 onwards ahead of the Christmas season. The series will release under Phase Four of MCU and shows Clint Barton rushing to complete a mission to get back to his family on Christmas. The series will consist of six episodes, releasing weekly until December 29. Read More.

‘Friends’ Star Courteney Cox Opens Up About Her Supernatural Encounter

In a recent interview, Friends star Courteney Cox opened up about having a supernatural experience. She narrated the experience in-depth and mentioned that it took place when she lived at the top of a mountain in Los Angeles. The actor is best known as Monica Geller on the show and is famous for keeping her surroundings neat. In conversation with US OK! Magazine, the actor shared that she had a supernatural encounter in the past. She mentioned that her acting teacher had once told her that she kept ‘feeling drafts’ in her house. A friend of hers also told her that they had a dream, where a woman clad in a white dress sat beside Cox as she slept on her bed. However, the actor still didn’t believe there was something amiss. Read More.

Britney Spears announced her engagement Sunday to her boyfriend Sam Asghari with an exuberant post displaying a diamond ring engraved with the word “lioness.”The news comes days after her father filed to end the court conservatorship that has controlled the singer’s life and money for 13 years. Read More.

READ | Jungle Cruise to release in India, Nolan set for next film | Hollywood recap for Sept 9