Nick Jonas recently took a subtle dig at Disney Channel for cancelling his show, Jonas after just two seasons. The singer took to his Instagram handle and shared a reel video, wherein he is seen doing an ongoing social media challenge, 'Tell me without telling me'. Sharing this hilarious video on social media, Nick Jonas simply wrote, "Tell me you were on Disney Channel" as his caption.

Fans and followers of Nick Jonas were quick to share their responses in the comment section. One of the users said, "All u gotta do is sing about how you fell in love with the pizza girl I mean come one Nick", while another added, "Shut up the show was iconic like pizza girl??? TV gold!!!". Another fan commented, "What about the diplomatic vague safe answers you gave as a 17 year old". A fan comment read as "You could have sang Introducing me or Pizza Girl... you choose the easy way out". Take a look at some more fans' reactions below. 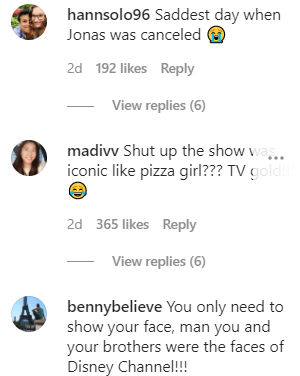 A peek into Nick Jonas' show

The first season of Nick Jonas' show was titled Jonas, while the second season was called Jonas L.A. Starring the famous band, Jonas Brothers, the Disney Channel Original Series is created by Michael Curtis and Roger S. H. Schulman. The first series premiered on May 2, 2009. Apart from the band members, it also stars Chelsea Kane Staub, Nicole Anderson, John Ducey, Frankie Jonas, Rebecca Creskoff among many others. The second season premiered on June 20, 2010, and ended on October 3, 2010.