Olivia Wilde is directing a biopic on Kerri Stug titled 'Perfect' and has recently roped in Thomasin McKenzie to play the lead. Read to know more detailed info.

Olivia Wilde on Instagram and Thomasin McKenzie in Jojo Rabbit


Kerri Strug is a retired American gymnast who was a member of the Magnificent Seven, the victorious all-around women's gymnastics team that represented the United States at the 1996 Summer Olympics. A biographical movie on the gymnast titled Perfect is in the works with Olivia Wilde as the director. Now, the makers have got the lead actor.

Deadline has reported that Olivia Wilde has found her lead for Perfect as Thomasin McKenzie is set to play the Olympian gymnast Kerri Strug on the big screen for Searchlight. The film tells the story behind Strug's historical Olympic vault to secure America's first-ever gymnastics team gold. It will be an intimate and courageous portrait of grit and determination.

Olivia Wilde is directing the movie from a script by Ronnie Sandahl. She has spent the last couple of months looking for the right talent to essay the role. In the end, the audition of Thomasin McKenzie "blew" her and the executives away. Wilde expressed her excitement about the young actor joining the team as the main character. The filmmaker wrote on her Instagram handle that the story of Perfect is complicated, challenging, heartbreaking, and beautiful. She could not imagine a better person to depict Kerri Strug's journey than McKenzie. 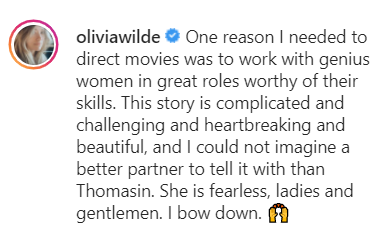 Thomasin McKenzie rose to fame with her lead role performance as Tom in Debra Granik's acclaimed 2018 drama film Leave No Trace. The actor has appeared in movies like The King, Jojo Rabbit, True History of Kelly Gang, and Lost Girls. McKenzie will next be seen in M. Night Shyamalan's thriller film Old. She is also working on the ensemble project Last Night in Soho, the drama movie The Power of the Dog, and The Justice of Bunny King.

Perfect will be produced by Nik Bower & Jeremy Baxter through Riverstone Pictures along with Thomas Benski & Moss Barclay who will finance under Pulse Films. Deepak Nayar of Riverstone and Marisa Clifford of Pulse will exec produce along with Olvia Wilde and Ronnie Sandahl. Searchlight acquired worldwide rights to the script for $15 million. Production is expected to begin in early 2022.