On 'Mean Girls' Day, Lindsay Lohan Goes Down Memory Lane & Shares THIS Scene From The Film

Lindsay Lohan headed to Instagram to share an iconic scene from her 2004 teen drama, ‘Mean Girls’ and to remind fans about the significance of October 3. 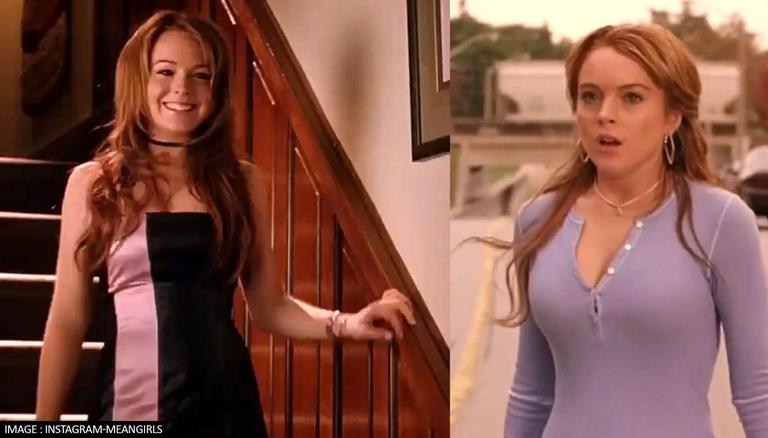 
Lindsay Lohan headed to her Instagram account on Sunday, to share an iconic scene from her 2004 teen drama, Mean Girls. Fans of the film are definitely familiar with the sentiments of nostalgia that October 3 brings with it. The actor posted a still from the film featuring her character, Cady Heron and her co-star Jonathan Bennett, who played her high school crush, Aaron Samuels. The film also saw Rachel McAdams, Lacey Chabert, Amanda Seyfried, Tina Fey and others take on pivotal roles.

On the occasion of Mean Girls Day, Lindsay Lohan took to her Instagram account to share a still from her 2004 film. The actor took a trip down memory lane and posted a picture of her character, Cady Heron and Jonathan Bennett's character, Aaron Samuels. In the scene the actor is referring to, Cady is dar-dreaming about her high school crush, Aaron, who suddenly turns around to speak to her. She is overjoyed and assumes her life would turn around, however, Aaron just wants to know the date. Candy then responds to him and says, "It's October 3rd."

According to reports by ANI, Lindsay Lohan will essay a role in a Netflix holiday romantic comedy in May. She will take on the role of a 'newly engaged, spoiled hotel heiress.' However, her life takes an unexpected turn when she has a skiing accident and gets amnesia. This is when she finds herself in the care of a 'handsome, blue-collar lodge owner' and his daughter just before Christmas. More details about the film and its cast have not been revealed yet.

Lohan began her career as a young child and rose to fame with her popular film, The Parent Trap. She also took on roles in famous films including Freaky Friday, Just My Luck, Confessions of a Teenage Drama Queen and many more. Most recently, she was seen in Speed-the-Plow and Sick Note, a British dark comedy. Apart from being an actor, Lindsay Lohan also appeared as a judge on a reality show, The Masked Singer.

WE RECOMMEND
Lindsay Lohan to make comeback with Netflix's Christmas rom-com
'Mean Girls' actor Rachel McAdams almost did not get the role of Regina George; know why
Lindsay Lohan posts heartfelt note for her late on-screen mom Natasha Richardson on b'day
On Cher's birthday, Lindsay Lohan drops in wishes; says 'blessed to encounter such greats'
Lindsay Lohan's mother on Chrissy’s hurtful words: ‘They're inflicting so much pain’
Listen to the latest songs, only on JioSaavn.com