'Our Vines Have Tender Grapes' Cast & Characters: Here Are Details About The Actors

Our Vines Have Tender Grapes cast and characters, from actor Edward Robinson to Morris Carnovsky and Agnes Moorehead, read ahead for more. 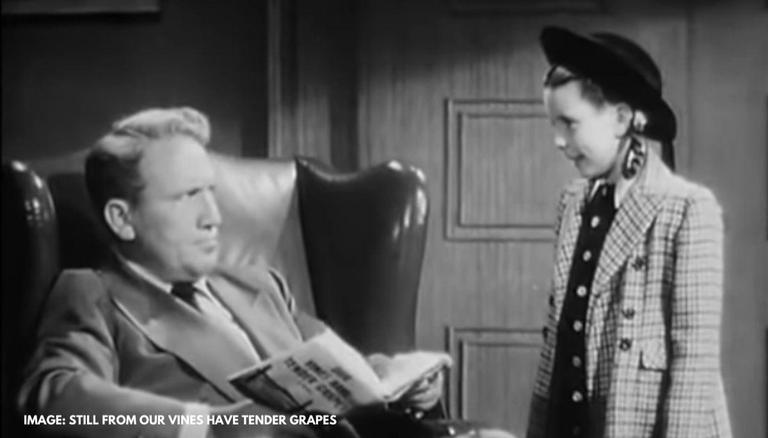 IMAGE: STILL FROM OUR VINES HAVE TENDER GRAPES


Our Vines Have Tender Grapes is an old American drama film directed by Roy Rowland. It stars Edward G. Robinson and Margaret O'Brien and is based on a 1940 novel with the same name, written by  George Victor Martin. The story follows the Norwegian-American residents of the small Wisconsin farming community. The performances of the actors in the film were praised by the audience. Read to know the cast of Our Vines Have tender Grapes.

Our Vines Have Tender Grapes Cast

Edward Robinson played the role of a Norwegian immigrant farmer who works in Wisconsin. He simply wants to work his land and be a loving husband and father to his family. The one great ambition in the life of Martinius is to build a new barn, but tragedy strikes.

Bruna Jacobson’s character was played by Margaret, who is seen as the wife of Martinius. Together the couple has a daughter named Selma.

Selma Jacobson is a seven-year-old girl who mostly appears in scenes with her playmate and five-year-old cousin Arnold. Selma’s character is carefree who lives a joyous life and is only temporarily clouded by the sudden death of Ingeborg Jensen.

Ingeborg Jensen’s character is played by Dorothy Morris, an emotionally disturbed young woman whose stern father had refused to let her attend school despite the pleas of newly arrived schoolmarm, Viola Johnson

Morris Carnovsky is seen as Bjorn Bjornson who has lost his livestock when lightning struck and burned down his newly erected but uninsured barn. When Selma generously donates her pet calf to the impoverished farmer, the townspeople in general, and Martinius in particular, follow suit, prompting Viola to reconsider her harsh views of country life and retract her letter of resignation to the school board.

IMAGE: STILL FROM OUR VINES HAVE TENDER GRAPES