Priyanka Chopra Jonas missed Nick Jonas as she took her mom & in-laws along for The 'Matrix Resurrections' premiere in San Francisco; see pics. 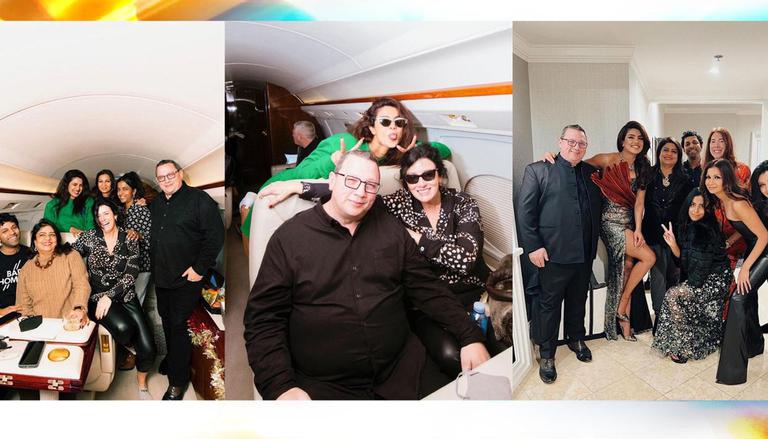 
Priyanka Chopra Jonas has been hobnobbing with the top stars of Hollywood at the moment, ahead of the release of The Matrix Resurrections. However, that's not the only crew she is bonding with as the actor has been spending quality time with her other 'crew' -- her family. The Mary Kom star seemed to have taken her loved ones along as she attended the premiere of her latest film.

Priyanka could not contain her excitement about her close ones being a part of the event. She dropped photos with her mother and her in-laws. She expressed her gratitude towards them but also missed her husband Nick Jonas.

Priyanka Chopra Jonas thanks her 'crew', family, as she attends Matrix 4 premiere

Priyanka posted pics that seemed to be from the private jet journey to the premiere venue in San Fracisco, California. Dressed in a green top and sunglasses, the 39-year-old could be seen all smiles as she posed with her mother, Dr Madhu Chopra, and Nick Jonas' parents, Denise Jonas and Paul Kevin Jonas, even goofing around in some of the pictures. Her cousin, manager and other members of her team could also be seen with her.

Her post then featured moments from when they dressed for the premiere. Shades of black and grey seemed to be the theme as Priyanka donned a shimmering tube dress with thigh-high slit for the occasion.

READ | Priyanka Chopra opens up about her Indian culture; says "My home is always with me"

She used the word 'crew' for her family, along with a heart emoji, and wrote that she was extremely thankful to her family for being a part of the 'amazing moment'. She also gave a shoutout to Nick Jonas as he could not make it for the gathering. She said she was grateful for her team, without whom she would 'never be able to do any of it.'

In her previous post, Priyanka, who plays the character Sati, struck a pose along with her co-stars from The Matrix Resurrections, Keanu Reeves, Neil Patrick Harris, Carrie-Ann Moss, Yahya Abdul-Mateen II, Jessica Henwick, Jada Pinkett Smith, director Lana Wachowski and others. She wrote that she could not for everyone to watch it.

The film releases in the theatres and on HBO Max on December 22.