Do you remember Taylor Swift's guest appearance in the season 2 finale episode of 'New Girl'? Find out what made this cameo of hers stand out amongst others. 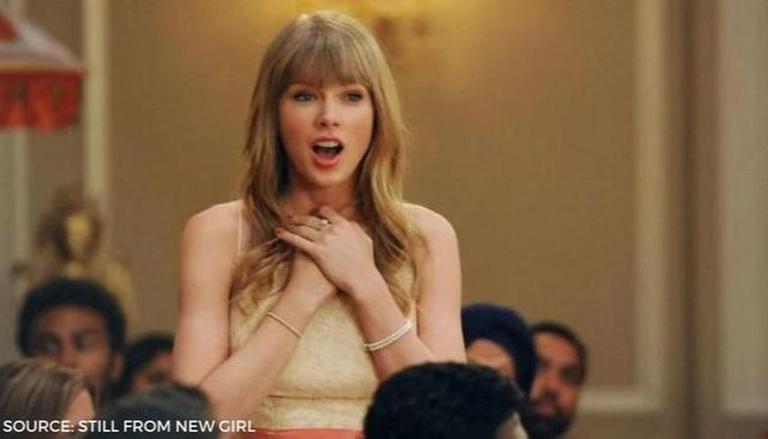 Source: A Still from New Girl


New Girl is a famous American TV show that aired for seven seasons, starting in the year 2011 and ending in 2018. Actors Zooey Deschanel, Jake Johnson, Max Greenfield, Lamorne Morris, and a few others starred in the show as its key characters. Amongst various guest appearances made on the show by celebrities was that of Taylor Swift, who is a popular American singer. The musician made a cameo on the finale episode of the second season of New Girl which was rather amusing, although very brief.

In the last episode of New Girl's second season, Taylor Swift made a fun cameo. With the arrival of Cece (Hannah Simone) and Shivrang’s (Satya Bhabha) wedding day and ceremony, on the show, came Elaine, who was essayed by Taylor herself. The Love Story hitmaker played the role of Shivrang’s (Satya Bhabha) ex, Elaine, who confessed her feelings for him and sabotaged the entire nuptial. While the comical scene showed Shivrang instantly leave the scene with his ex, Elaine (Taylor Swift) in his arms, Cece was seen eventually confessing her feelings for Schmidt.

Although the singer's cameo was kept pretty short and quick in New Girl, it meant a lot to the creator of the sitcom Elizabeth Meriwether. This significance of Taylor's special guest appearance on the show was solely due to Meriwether's admiration for Taylor, and how big a fan she was of her. While it was not too tough to get the Shake It Off hitmaker on board, meeting her was a major fangirl moment for Meriwether.

Taylor Swift's cameos are always very special and entertaining for all her fans and followers. But her New Girl cameo stood out amongst all the others as Taylor turned out to be a fan of the show herself. This made her guest appearance a little extra special, for not only her fans but also for those on the show. The singer and musician has also appeared in other entertainment projects such as Hannah Montana: The Movie and Jonas Brothers: The 3D Concert Experience, both in 2009 as herself.