American actor Regina Hall appeared on ABC's Jimmy Kimmel Live during which she was asked about the infamous Oscars slap. 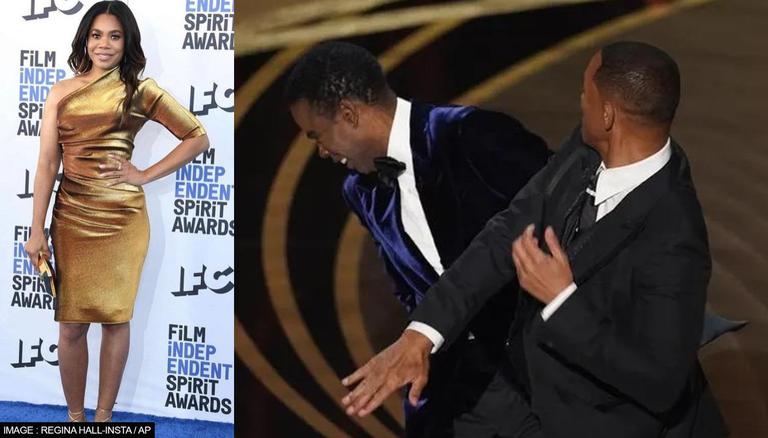 
Oscars 2022 saw more than just red carpet moments, flashy gowns, stylish suits and winning moments. The 94th Academy Awards turned out to be one of the most controversial nights in the history of the Oscars after Hollywood star Will Smith smacked comedian-host Chris Rock on the stage of Dolby Theatre.

In an unexpected turn of events, King Richard actor Will Smith stormed the Dolby Theater stage to confront Chris Rock just moments before collecting his first-ever Oscar. Jada Pinkett Smith's hair was the subject of an insensitive joke made by the Grown Ups actor, and everyone's favourite Men In Black actor, Smith, wasn't too thrilled about it. Smith seemed to take exception to Rock's G.I. Jane-related remark regarding Jada Pinkett Smith's shorn head.

Now, on Tuesday, American actor Regina Hall appeared on ABC's Jimmy Kimmel Live during which she was asked about the infamous Oscars slap. The Girls Trip actor skillfully tried to avoid bringing up the altercation between Smith and Rock, asserting that it was a 'crazy' night. Guest host Lamorne Morris, 39, jokingly asked Hall, "Who would go on stage if something was not planned?" Replying to him, she said, "I know, it was a crazy night." He then added, "It was a crazy night. I'm glad that was the only time anybody walked on stage that night." Hall asserted, "Yeah, yeah that was it."

Recently, in an interview with Variety, Regina was asked about Will Smith’s recent post in which he apologized for slapping Chris Rock at the Oscars. To this, she said, "I think it’s a tough thing and I know it’s a difficult road," adding, "Honk for Jesus. Save Your Soul." She added, "The first step is he apologized. How people see it, it’s up to them…I know that wasn’t easy."

Will Smith issues an apology

Will Smith recently apologised to Chris Rock in his latest social media post, thereby breaking the silence post altercation. Responding to why he didn’t apologise to Chris in his acceptance speech, Smith said, "I was fogged out by that point. It is all fuzzy. I’ve reached out to Chris and the message that came back is that he’s not ready to talk. When he is ready, he will reach out. I will say to you, Chris, I apologise to you. My behaviour was unacceptable and I am here whenever you are ready to talk. I want to apologise to Chris’ mother." Take a look at the post here:

READ | Will Smith's ex-wife stands in support of actor; hopes fans forgive him for Oscars feud