'Shang-Chi' Director On Ben Kingsley, Zendaya On Her Roles: Hollywood Recap For Sep 8

'Shang-Chi' director on Ben Kingsley's cameo in the movie, Zendaya reveals she once refused to kiss on screen. Here is Hollywood Recap for September 8 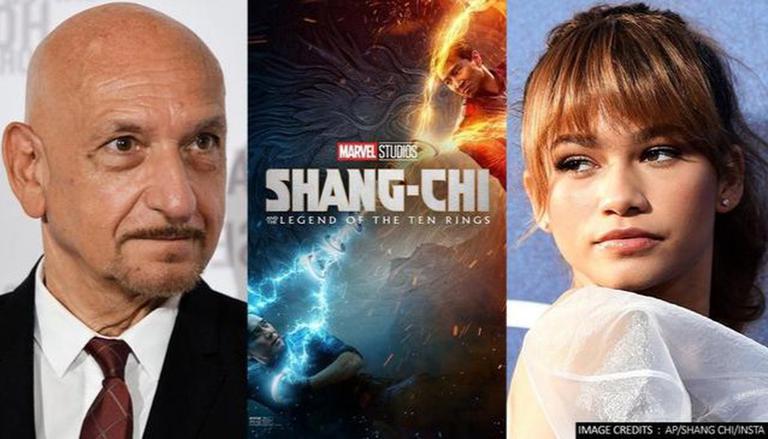 Marvel Cinematic Universe's recent movie Shang-Chi and the Legend of the Ten Rings, not only introduced the first Asian superhero but also brought back a familiar face. Sir Ben Kingsley made his MCU return with the movie Shang-Chi, he reprised his role of Trevor/fake Mandarin. Director Destin Daniel Cretton in an interview with Entertainment Weekly (EW) shared a funny story behind Sir Kingsley's return to the franchise. Read More.

Actor Zendaya entered the showbiz at a very young age, she began her career as a child model for Macy's, Mervyns, and Old Navy. The actor was 14 when she got her big breakthrough Disney's show Shake It Up. Zendaya, in one of her recent interviews, recalled how she had once refused to kiss on-screen for the show. Read More.

After the huge success of the second edition of Suicide Squad, James Gunn is gearing up for the release of its spin-off series featuring John Cena as Peacemaker. Titled Peacemaker, the series is currently grabbing headlines after numerous fan accounts started theorizing Dave Bautista's possible DC debut as Bane in the series. However, the rumours and theories were quickly shut down by the creator as he engaged in a long conversation with the fans confident in their theories. Take a look at James Gunn put a rest on the fans' claims. Read More.

Britney Spears, Iggy Azalea Laud Each Other On Instagram To Mark 6 Yrs Of 'Pretty Girls'

Amidst the conservatorship battle between Britney Spears father James Parnell Spears, the pop star is showing love to one of her past collaborators, rapper Iggy Azalea on social media. The singer reminisced over their stage performance of their hit single Pretty Girls and shared her experience of working with Azalea. While the post alone was enough to melt the fans' hearts, the icing on the cake was Azalea's lengthy response reciprocating Spears' love. Take a look. Read More.