To mark National Siblings Day, Sophie Turner extended her wishes and shared an adorable picture with her elder brothers on Instagram which is dripping love.

On the occasion of National Sibling Day, several stars seem to be walking down the memory lane and sharing pictures of their childhood days to wish their siblings on this occasion. While this trend seems to be gathering momentum in Hollywood, 'Game of Thrones' star Sophie Turner is no such exception and shared a beautiful snap from her memory.

Read: Sophie Turner Reveals Why Joe Jonas Has Been Finding It Tough To Practice Self-isolation

In the cute picture, a small and adorable Sophie can be seen striking a perfect pose with her two elder brothers, Will and James whom as per reports she considers them her best friend. Expressing his love for his sister, earlier in February, Will shared a beautiful baby picture of Sophie while celebrating her birthday and the fans could not control their excitement of watching little Sophie. The star dressed in white baby clothes can be seen cuddling on a brown sofa. Taken aback in surprise, there were several fans of the GoT star who flooded the comment section with their beautiful wishes while the other was left awestruck after seeing little Sophie. 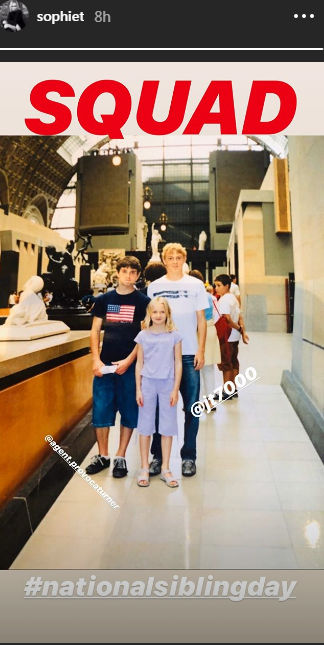 One of the fans who recognized the brown sofa and wrote that she can remember that sofa and judging it by their mother's post, it almost lasted for two years. Another user compared the picture of the little Sophie with now and said that she still makes that weird face sometimes and also extended her best wishes.

Sophie and her singer husband Joe Jonas who have always dished out major couple goals recently shared a picture and the frenzy fans cannot control their laughter over the same. Earlier on April 10, the X-Men star shared a funny status update through her Instagram account where she revealed that she had finally managed to do a make-over of her husband and the result will leave you in splits. Sophie shared a picture of the Jonas brother where he sported subtle mascara as well as pink eye shadow. The picture went viral as soon as Sophie shared it.

And this makeup did not seems to satisfy Sophie that she shared another flattering angle of Joe's face where the innocent soul can be seen flaunting the highlighter on his face and she captioned the snap as, "That highlight".

Read: Sophie Turner To Katy Perry; A Look At Celebrities Who Are Expecting In 2020

PEOPLE HAVE PLEDGED SO FAR
LATEST NEWS
View all
2 hours ago
Gal Gadot and Kristen Wiig on possibilities of queer romance in Wonder Woman 1984
39 mins ago
Netflix, Amazon, Hulu and others express solidarity after death of George Floyd
1 hour ago
Jennifer Aniston’s iconic portrait to be auctioned to generate COVID-19 relief funds
4 hours ago
Richa Chadha-inspired outfits that are perfect for brunch dates
3 hours ago
Chris Evans says his return as Captain America is 'risky', here's why