The much-awaited trailer of 'The Eyes of Tammy Faye' released on June 9, 2021, and actor Jessica Chastain's performance as Tammy gave Sophie Turner "chills" 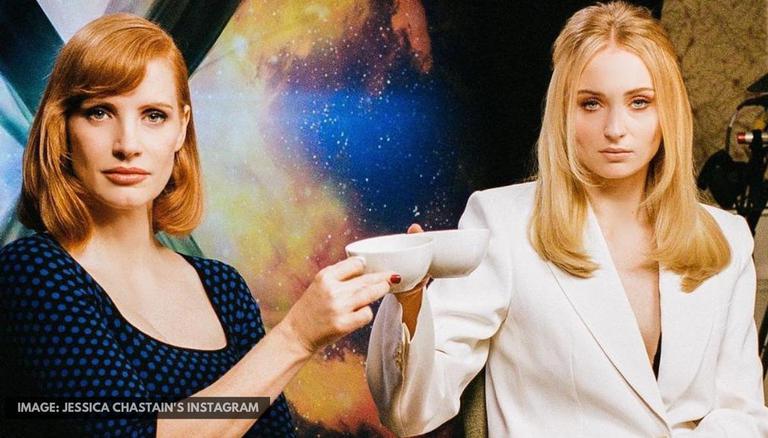 
The much-awaited trailer of the upcoming drama film The Eyes of Tammy Faye has finally been released by the makers, along with announcing its theatrical release date. On Monday, The Jessica Chastain & Andrew Garfield-starrer went on to make headlines in no time after its trailer dropped on YouTube as it left many impressed and created quite some buzz on social media. Now, Jessica's Dark Phoenix co-star Sophie Turner has also shared her reaction to The Eyes of Tammy Faye trailer and lavished the two-time Academy Award-winning actor with praise.

Based on the eponymous documentary by filmmaker Fenton Bailey, The Eyes of Tammy Faye is all set to hit the big screen on September 17, 2021. Much ahead of its release, Searchlight Pictures dropped the trailer of the highly-anticipated film yesterday, i.e. June 9, 2021. Ever since the trailer of this Michael Showalter directorial released, it has been garnering a lot of attention and positive response by the masses on social media.

Now, joining the bandwagon is the Game of Thrones star, Sophie Turner. The beloved wife of Joe Jonas took to her Instagram Stories to share The Eyes of Tammy Faye trailer and revealed getting "chills" by lead actor Jessica Chastain's performance in the trailer as the late American singer, author & evangelist, Tammy Faye. Along with revealing getting chills watching Jessica, Sophie also gushed, "Yaaas Queen" as she shared her reaction to the upcoming film's trailer.

READ | Sophie Turner gets furious at husband Joe Jonas for THIS reason; Take a look 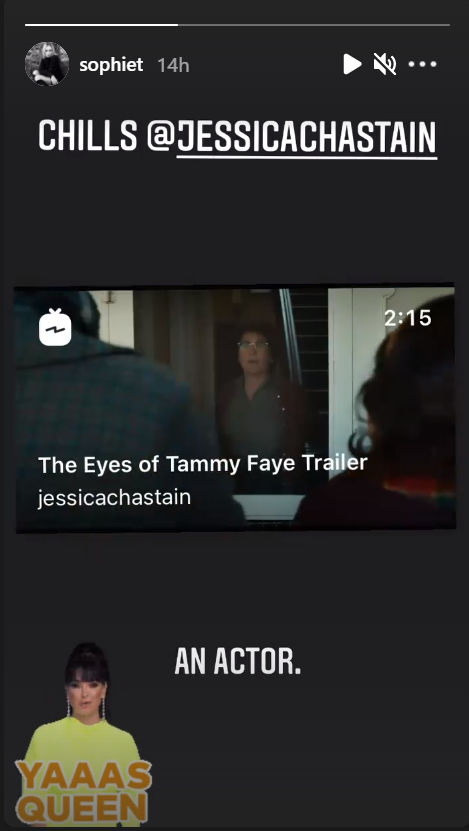 More about 'The Eyes of Tammy Faye'

Along with Jessica Chastain and Andrew Garfield, The Eyes of Tammy Faye cast also boasts of Cherry Jones, Fredric Lehne, Louis Cancelmi, Mark Wystrach, Sam Jaeger, Gabriel Olds, and Vincent D’Onofrio in key roles. In addition to playing the titular role in the movie, Jessica has also co-produced it with Kelly Carmichael, Rachel Shane and Gigi Pritzker. The official synopsis of The Eyes of Tammy Faye's plot reads:

THE EYES OF TAMMY FAYE is an intimate look at the extraordinary rise, fall and redemption of televangelist Tammy Faye Bakker. In the 1970s and 80s, Tammy Faye and her husband, Jim Bakker, rose from humble beginnings to create the world’s largest religious broadcasting network and theme park, and were revered for their message of love, acceptance and prosperity. Tammy Faye was legendary for her indelible eyelashes, her idiosyncratic singing, and her eagerness to embrace people from all walks of life. However, it wasn’t long before financial improprieties, scheming rivals, and scandal toppled their carefully constructed empire.

Watch the trailer of 'The Eyes of Tammy Faye' here: