Spike Lee took to Instagram on Monday, April 26, 2021, to praise fellow legend Glenn Close for her memorable performance at the Oscars on Sunday.


American director Spike Lee took to Instagram on Monday, April 26, 2021, to praise fellow legend Glenn Close for her memorable performance at the Oscars on Sunday. Glenn Close danced to the E.U. 1988 single Da Butt, which is famously featured in Lee's 1988 film School Daze. Along with the video, the actor also penned a note revealing details about the same.

Taking to his Instagram handle, Lee greeted everyone and said that he wants to give a shout-out to his sister Glenn Close, who he heard gave him love for School Daze. He added that she was doing Da Butt! and he saw it on the video. Along with the video, he wrote, “Shoutout To My Sista @GlennClose For Showing Love To SCHOOL DAZE, Shouting Out D.C.’s Own E.U. And Myself And Doing DA BUTT At The Oscars Last Night. P.S. “Tonya Got A Big Ol’ Butt Oh Yeah”. Take a look at the post below.

As soon as the director shared the post online, fans were quick enough to flood the comment section with all things nice. Some of the users commented on the actor’s performance, while some were gaga over the song. One of the users wrote, “Omg glen close deserves to win an Oscar for that alone”. Another user wrote, “this is the shout out I needed to see this morning”. Take a look at a few more comments below.

READ | Viola Davis pretends to take a shot; Netizens say, 'Give her an Oscar!' 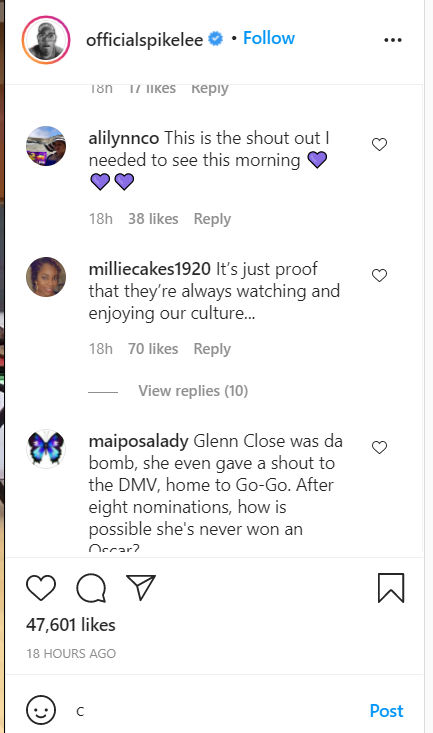 The show-stopping moment occurred during a segment in which Lil Rel Howery walked through the Oscars audience quizzing them on classic songs from the past, asking them if they knew whether the compositions were nominated for Best Original Song or not. Close admittedly knew the song and eagerly obliged Howery's request for her to demonstrate her understanding by dancing. While Da Butt did not receive an Oscar nomination, Lee used it in School Daze, propelling it to No. 35 on the Billboard Hot 100.

READ | Explainer: What was with that weird Oscar ending?

Meanwhile, ABC executive Rob Mills told Variety that Close's "booty boogie" was certainly something no one in the expected and that if Close hadn't heard Da Butt before this, she knew it when Lil Rel asked her about it. Many celebs and co-stars went on to laud the actor for her performance. Watch the video below.

READ | Daniel Kaluuya wins an Oscar, thanks all-black team of 'Judas and the Black Messiah'

READ | If you loved Daniel Kaluuya's Oscar speech, here is a list of his best movies