'Stillwater' Trailer Has Matt Damon Going Beyond Borders To Save His Daughter: Watch

'Stillwater' trailer has been released by the makers featuring Matt Damon in the lead role as a father who will stop at nothing until he rescues his kid. 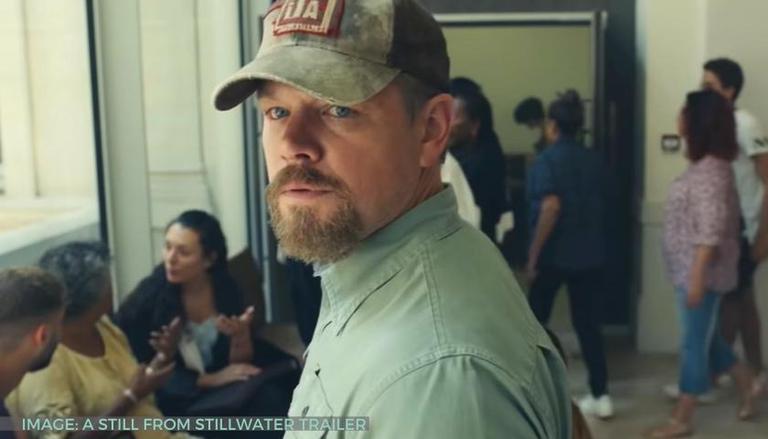 IMAGE: A STILL FROM STILLWATER TRAILER


The Stillwater film's cast includes Matt Damon in the lead role as Bill Barker, a father who is the last hope to save his daughter from prison in a foreign country. The upcoming crime drama film is directed by Academy Award-winner Tom McCarthy. The makers have shared the first trailer of the movie.

Focus Features have dropped the first full-length Stillwater trailer giving a glimpse at the movie. The video starts with Bill Barker as a worker in the US who goes to France to meet his daughter, Allison. When he reaches the country, it is revealed that Allison is in prison accused of the murder of a girl that Allison says she loved. There is no legal way for Bill to get her kid out so he takes it upon himself to rescue his child. He gets help from a local woman and tries to find out the truth behind the killing. Bill gets beaten up as he is a foreign citizen asking many questions. However, he does not gives up and moves ahead with his mission. The video has thrill, drama, and suspense. Stillwater release date is set for July 30, 2021. Check out Matt Damon in Stillwater trailer below.

Stillwater follows an American oil-rig roughneck from Okalohoma who travels to Marseille to visit his estranged daughter. She is in jail for a murder she claims she did not commit. Bound with language barriers, complicated legal systems, and cultural differences, Bill shapes a new life for himself in France as he makes it his personal mission to free his daughter.

Along with Oscar-winner Matt Damon, the Stillwater cast includes Abigail Breslin, Camille Cottin, Deanna Dunagan, Lilou Siauvaud, and others. The story is written by Tom McCarthy, Marcus Hinchey, Thomas Bidegain, and Noé Debré. It was initially set to arrive on November 6, 2021, but was delayed due to the COVID-19 pandemic.

READ | 'Fatherhood' trailer: Kevin Hart as a single dad will tug at your heartstrings; watch

IMAGE: A STILL FROM STILLWATER TRAILER

READ | 'The Protégé's action-packed trailer with Maggie Q, Samuel Jackson & Michael Keaton is out
READ | 'The Green Knight' trailer: Dev Patel is on a quest for honor as he faces mystical beings
READ | 'Stillwater' trailer: Netizens intrigued about Matt Damon's role in this dramatic thriller