'The Conjuring 3' director sheds light on the post-credits scene which was filmed but then had to be removed. Read on to more about the specifics of the same. 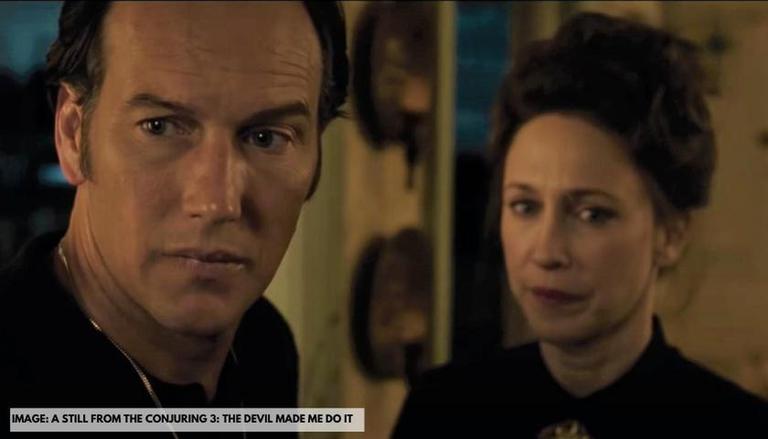 Image: Still from The Conjuring: The Devil Made Me Do It


The Conjuring 3 director Michael Chaves, who also directed a film for a similar franchise, known as "The Curse Of La Llorona", has revealed that the third film in The Conjuring film franchise almost had a post-credits scene. As per a report on NME, the director revealed that the aforementioned end credits scene expanded on some of the ideas and themes that were are a part of The Conjuring 3. But, the article did not quote him divulging the specifics of the scene. Instead, the director responded by saying that the end of the film is indeed a satisfying one and makes the film in question a sell-contained piece, with the doors for a future potential crossover being left open. The article in question also quoted the director praising the work that went into making the villains for the franchise and he is more than open to seeing a crossover event happening.

As reported earlier, Chaves said that the third instalment in the horror franchise is going to be the biggest and the darkest presentation yet. During an interview with the officials at IGN, the director revealed that The Conjuring 3: The Devil Made Me Do It, will take the Warrens (Played by Aquaman star Patrick Wilson and Vera Farmiga of Godzilla: King Of The Monsters fame) in new places. In the very same conversation with the IGN personnel, the director revealed that she had shown a copy of the film to Vera Farminga and her husband. After seeing the same, the latter said that it is the darkest and the biggest conjuring movie yet.

A little about The Conjuring 3: The Devil Made Me Do It

As per a report on ScreenRant, The Conjuring: The Devil Made Me Do It cast members will be instrumental in retelling the story of the case that centred on Arne Johnson, who killed his landlord in the year 1981. Post his arrest, Johnson went on to claim demonic possession as a defence, making him the first one in the history of the United States to do so. Soon, the case would come to be known as the" Devil Made Me Do It" case, which has been incorporated in the upcoming film's title.

Originally, the case even involved an 11-year-old David Glatzel, who was believed to be possessed after a lengthy list of troubling occurrences. His family, eventually, contacted the Warrens. It was during an attempted exorcism of Glatzel that family friend Johnson, who was present at the time, is said to have been possessed by the demon that resided in Glatzel all along. The film in question will see the return of Patrick Wilson and Vera Farmiga as real-life supernatural entity specialists Edward Warren and Lorraine Warren, respectively. The Conjuring: The Devil Made Me Do It review will be shared with the readers as and when the film is released in India.

The Conjuring: The Devil Made Me Do It trailer:

READ | If you loved 'The Conjuring 3' trailer, here is a list of horror films to binge-watch
READ | 'The Conjuring 3 is more of a love story than a horror', says lead actor Vera Farmiga
READ | The Conjuring 3's spooky new clips sheds light on deeds of the devil; Watch Here