The Housewife And The Hustler: Fans Upset Over Scandals Of Erika Jayne And Tom Girardi 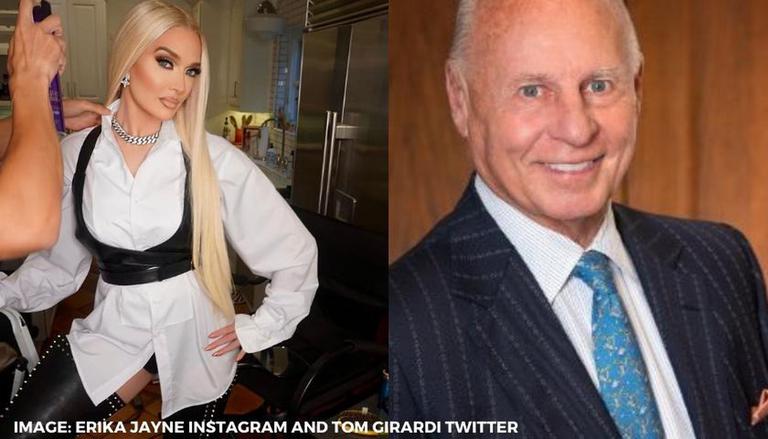 
The Housewife and the Hustler focused on the legal trouble between Erika Jayne and Tom Girardi. The show dived deep into the scandals and thus a number of fans were upset over the alleged claims. The interviews from the show revealed that the couple would often blow money and were also involved in embezzlement. Jayne split from Tom back in November. However, the details of their embezzlement have now resurfaced enraging several fans on Twitter.

The case held up against Erika Jayne and Tom Girardi was about a plane crash that occurred in October of 2018. The settlement money was supposed to reach the family members of the victims. However, allegations were raised towards Erika Jayne and Tom Girardi, who was accused of using that money to fund their own lavish lifestyle and also pay off loans to keep Tom’s law firm standing tall. Fans reacted to this and some even supported Jayne mentioning that Tom is the only one responsible for their legal troubles. However, some other fans seemed to express their hate towards both, Jayne and Tom.

We knew this was bad, but I don’t think we knew it was THIS bad. I’m even more disgusted by Erika Jayne now. #TheHousewifeAndTheHustler pic.twitter.com/ZurjPupAbN

Tom Girardi’s clients: We better get our settlement money!

What really stood out in #TheHousewifeAndTheHustler is Tom Girardi's former client saying he told him, "look at this video I did for her." Basically, Tom Giradi admitted the money funneled into Erika Jayne's business account as a loan from his firm was to fund her lifestyle. pic.twitter.com/q9LsAzHVCP

Awww... Poor Erika Jayne had no idea what her husband was doing. She was completely blindsided.#TheHousewifeAndTheHustler pic.twitter.com/hhHy9eX1Um

She proudly flaunted the STOLEN millions and @BravoTV continues to celebrate her? DISGUSTING

I’m sorry how the hell did Erika Jayne get away for so long of this not being discussed on HW’s AT ALL.
If this was one of the black HW’s,
you BEST BELIEVE Andy would of brought it up every reunion #RHOBH #TheHousewifeAndTheHustler pic.twitter.com/k7n20Kaf61

I think Erika Jayne is innocent in this whole thing tbh. I don’t think she knew about Tom’s legal & financial problems. #RHOBH pic.twitter.com/egzPPbaE74

The interview showed that the couple was not only blowing money but also staged their divorce as a part of their complex scheme. The couple was also accused of embezzling money from plane crash victims among other counts, according to ET Online. The hour-long documentary showcased a number of interviews of certain plane crash victims who claimed they were victims of the embezzlement as well.

Danielle Staub was also interviewed for the show and she revealed the encounters she had with Jayne. In the interview, she mentioned that she has worked with Jayne and never got a good vibe from her. She added that she talked to a number of people and she is aware of certain fake people. She then continued to say that it turns out Erika Jayne was one of them as well. Staub in her post on Instagram also revealed that the franchise needs to stop paying the cast for their fake lives as many crimes against society will continue to happen. She added that the fans are the ones that suffer financially.