The Late Late Show: James Corden Takes A Tour Of The Iconic 'Friends' Sets With Its Cast

The Late Late Show's James Corden treated fans with a BTS video from the sets of Friends as he was joined by the star cast for his "Carpool Karaoke" session. 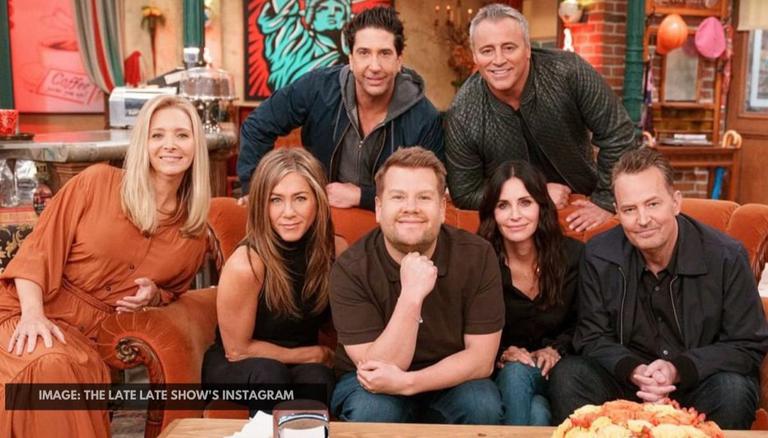 
Three weeks into the release of the long-awaited Friends Reunion episode last month, The Late Late Show's James Corden gave fans a sneak-peek into the behind-the-scenes footage of the cult sitcom's reunion special. On Thursday, the official Instagram handle of The Late Late Show released a BTS video clip of the show's host along with Friends stars Jennifer Aniston, Lisa Kudrow, Courteney Cox, Matthew Perry, Matt LeBlanc and David Schwimmer as they discussed how it felt filming the highly-anticipated reunion episode of the NBC series. James also took a tour of the old sets of American sitcom while Matt recalled having "a lot of laughs" on the sets.

A post shared by The Late Late Show (@latelateshow)

After hosting the much-loved episode of Friends Reunion, television personality James Corden recently took fans on the sets of the David Crane and Marta Kauffman show, situated at the Warner Bros. Studio in Los Angeles, California. In the BTS clip released by The Late Late Show, host James joined the lead actors of Friends on the set of Central Perk cafe and discussed their feelings and experience about getting back together after more than 17 years. In the 11-minute-long video clip, the 42-year-old drove Jennifer Aniston, Lisa Kudrow, Courteney Cox, Matthew Perry, Matt LeBlanc and David Schwimmer through the studio lot on a golf cart.

While onboard, the Friends stars also had an impromptu session of James Corden's popular "Carpool Karaoke" to their sitcom's iconic theme song, I'll Be There For You. Upon arriving at the soundstage, the Gavin & Stacey actor also got to explore the old sets of Friends. While taking a tour of Chandler and Joey's living room, James mentioned, "This is so weird, I feel more nostalgic than if I was going back to an old apartment I ever lived in".

Later, he was rejoined by the star cast in Central Perk to discuss how it felt shooting in Friends' sets again after almost two decades. Speaking about the same, actor Matt LeBlanc expressed, "We spent a lot of time in these sets, had a lot of laughs, some of it made it on the camera". He added, "But the funniest stuff, like that, happened between us that never made it to TV, those are like the memories we keep talking about".

READ | If you loved Courtney Cox in Friends, here are her five other roles that you will enjoy

Take a look at Friends Reunion BTS below:

A post shared by The Late Late Show (@latelateshow)

READ | After 'Friends', will 'Hip Hip Hurray' get a reunion? Purab Kohli responds to fan queries