Tom Felton, who essayed Draco Malfoy in the Harry Potter franchise, shared a throwback video of him playing a game of slaps with Emma Watson. 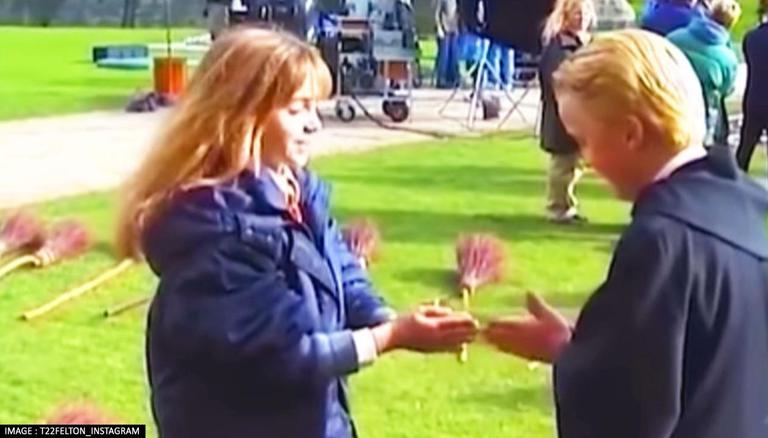 
Harry Potter 20th Anniversary: Return To Hogwarts is only a few days away and apart from Potterheads, the film's cast is also set to go on a rollercoaster ride of nostalgia. While fans are revisiting the film series before the reunion special, Tom Felton, who essayed Draco Malfoy in the movie, shared a throwback video of him playing a game of slaps with Emma Watson. Watching the video, all Harry Potter fans felt nostalgic and expressed their excitement at seeing the cast reunite after years.

Taking to his Instagram handle, Tom Felton shared a throwback video from the sets of Harry Potter And The Sorcerer's Stone. In the short clip, he and Emma Watson were seen engaged in a game of slap hands, while all other cast members were commenting on their game.

At first, a young Daniel Radcliffe said, "Can I just say something? Emma is a competitive person. She will not lose," on the camera. Rupert Grint also photobombed the video but was hilariously pushed by one of his fellow actors. In the background, the grand Hogwarts ground was seen with brooms of the first-year students lying down. Seemingly, the video was captured when the young actors were filming their first flying lesson.

The video saw a plethora of reactions from Potterheads as they get nostalgic and were taken back to 2001 when the movie first came out.

One of the fans wrote, "OH GOSH I CAN'T STOP SMILING AT THIS," while another user penned, "I'm never ever getting over this video ever."

One other fan shared their favourite part of the video and wrote, "My fav part: Rupert in the middle *someone pushes him*." Several others asserted that they cannot wait for the reunion special.

Harry Potter Reunion Special will mark the 20th anniversary of the film franchise. The reunion special will see the film's lead cast, Daniel Radcliffe, Rupert Grint and Emma Watson reunite after years and talk about the making of the movie. Several other members are also expected to join them. It will stream on HBO Max and Amazon prime Video (in India) on January 1, 2022.