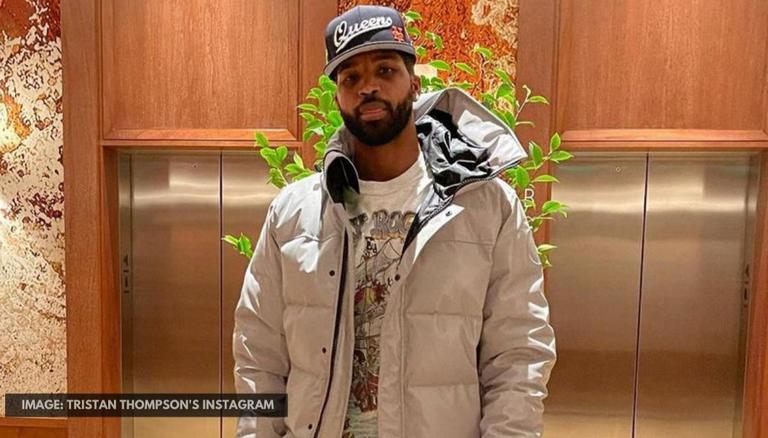 
It seems like Tristan Thompson has finally responded to all the infidelity rumours surrounding his and Khloe Kardashian's much-talked-about split. It was recently reported that the professional basketball player attended a friend's birthday party at Los Angeles' Hotel Bel-Air, where he was spotted "acting single" and later "disappeared into a bedroom with three women". Although his daughter's mother, Khloe, is yet to react to the ongoing rumours, Tristan has rubbished them by taking a sly dig at these allegations on Twitter.

In a recent report by ET, Khloe Kardashian's relationship with beau Tristan Thompson has hit rock bottom after rumours about him cheating on his ladylove again made headlines and the celebrity couple has also apparently called it quits a few weeks ago. Then, Daily Mail recently reported that last Friday, after disappearing into a bedroom of Hotel Bel-Air with three women, Tristain "emerged 30 minutes later looking 'dishevelled,'" which created quite a stir online. Now, the 30-year-old took to Twitter and shared a cryptic tweet, which is presumably in response to all the current cheating rumours and his breakup with the reality star.

On June 21, 2021, the beloved father of True Thompson took to the micro-blogging platform and shared a streak of blue-cap emojis which Twittrati believe could be his response to the recent infidelity allegations. Following his tweet, Cosmopolitan reported that according to Urban Dictionary, the aforementioned emoji "refers to whenever someone is 'cappin' which means you're either lying or over-exaggerating your actions to meet someone else’s expectations". Thus, it possibly means that the concerned tweet was Tristan's way to rubbish all the allegations.

Meanwhile, a source revealed to ET that although Tristan and Khloe have decided to part ways, they will continue co-parenting their three-year-old daughter, True, in a "loving" and "healthy" way. It was also revealed that the former love birds are on good terms with one another because the owner of Good American wants to maintain a good relationship with her child's father. However, neither of them have confirmed or denied the same as of yet.

WE RECOMMEND
Khloe Kardashian is trying to start her relationship with Tristan on a fresh note: Reports
Khloe Kardashian shares stunning pictures on Instagram ahead of 'KUWTK' reunion episode
Khloe Kardashian hits back at troll who slammed her for wishing Kim's ex Kanye
Tristan Thompson THREATENS to follow the person if he ever got spat on like Trae Young
Khloe Kardashian settles Good American lawsuit after private agreement with d.bleu.dazzled