Actor Vanessa Morgan had recently given birth to a baby boy and has revealed what they have named him; Have a look at her Instagram post

Vanessa Morgan had been posting her pregnancy pictures quite frequently when she was expecting, with her fans getting all excited for her baby’s arrival. Now that she has finally given birth to a baby boy, she has revealed to her fans what she and her estranged husband Michael have named him. In her latest post, she has shown a small glimpse of her baby’s hand and has also penned a long message about her journey of becoming a mother. Have a look at what she has named her baby along with her message.

Vanessa Morgan shares a glimpse of her baby boy

Vanessa Morgan may have been estranged from her husband Michael Kopech, but both of them have been together in the process of the birth of their son. She managed to build a lot of excitement among her fans about her baby, having constantly kept them in the loop through her social media accounts. Now that she has finally become a mother, she has shared a picture that just gives a glimpse of her baby boy’s hand. Along with that, she has also written a long and heartfelt message about motherhood and what they have named her child.

The actor began her message by saying that the birth of her son was the “most challenging” yet “most beautiful experience” of her life. She then revealed that she “welcomed” her baby boy along with Michael Kopech on January 29; and that they have named their child "River". She further said that the couple is spending their time with their family, having recently given birth. She lastly said that the experience of becoming a parent is the most “rewarding gift in the entire world”; and expressed her gratitude to God. Her fans joined her in welcoming baby River in the comments section of the post. 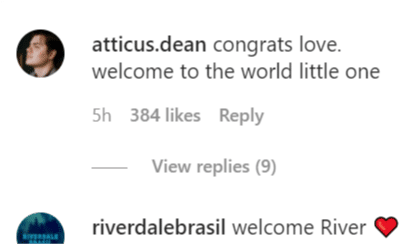 Michael is yet to share a word on finally becoming a father. The marriage between Vanessa Morgan and Michael Kopech hit the rocks when the latter filed for divorce in June last year. Even though the couple is estranged, they were together in the journey of becoming parents.

ALSO READ: 'My Fair Lady' Cast And Everything You Need To Know About Them