In 2018, rapper Drake had commented on Athiya Shetty's birthday post for her father, Suniel Shetty. She had penned a long note for him. See post. 
Back in 2018, Athiya Shetty had dug out an old pic with her father Suniel Shetty to wish him on his birthday, August 11. In the pic, daddy Suniel looked after baby Athiya during a function. The post had grabbed Canadian rapper Drake's attention, who had commented, “Legend” on it. As soon as fans had noticed his comment, they wondered how Drake and Athiya knew each other.

As soon as the Mubarakan actor had stumbled upon his comment, she had replied "hahaha" followed by a heart emoji. Meanwhile, Varun Dhawan's comment had left fans in splits. He had asked, "Who knew you were Kiki?", referring to Drake's hit, "Kiki, do you love me?". Netizens had rushed to drop comments. While a user had asked, "How, are they, friends?", another fan had penned, "Who came here to just see Drake's comment?". 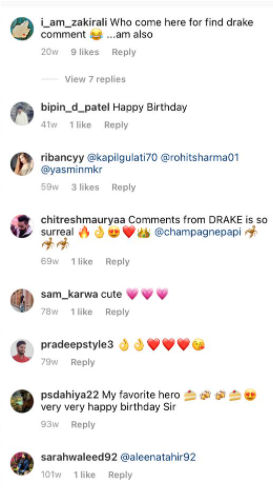 In her sweet note for Suniel Shetty, she had written, "Happy birthday, Papa.Thank you for always being so patient with me, keeping the faith when I forget to and never letting go of my hand. I hope to make you proud every single day. I love you. With a heart like yours, you deserve all the happiness the world has to offer." Recently in April, Suniel had also shared a B&W pic with his daughter and had written "No matter how old she maybe... it’s always Pa paaaaa."

On the work front, Athiya was last seen in the movie, Motichoor Chaknachoor alongside Nawazuddin Siddiqui. She will next be seen in Hope Solo, in which she will play the role of a Kashmiri student and footballer. However, not many details about the movie are out yet.

34-year-old rapper Drake received the Artist of the Decade Award at the Billboard Music Awards 2021 along with his son Adonis, who stood by his side. A clip from the event went immensely viral as fans couldn't stop swooning over how his son held him tight while holding his father's award, as he gave his acceptance speech. A user wrote, "This is the best thing on the internet today."