Ahead of the Russo brothers' visit to India, here's a look at Joe Russo's visit to the country in 2019 when he relished a special Avengers-themed thali. 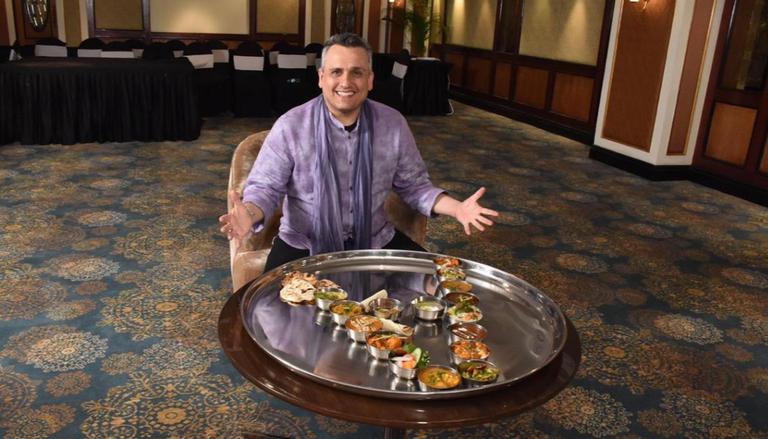 
Director duo Joe and Anthony Russo, known for Marvel Studios’ Avengers: Infinity War and Avengers: Endgame, is all set to visit India for the premiere of their forthcoming Netflix film The Gray Man, also starring South superstar Dhanush in a pivotal role.

This may be Anthony's first visit to India, but Joe had earlier visited India in 2019 to promote their Marvel film, Avengers: Endgame, during which he relished an Avengers-themed traditional thali.

Joe Russo's visit to India and his experience with Indian cuisine

The pictures that went viral on social media saw Joe overwhelmed by the traditional Indian thali as he could be seen savouring every last morsel of food. The popular director was all decked in Indian attire as he donned a traditional lavender Kurta and a matching stole to go along with. The thali served to Joe wasn't an ordinary one, it was specially made for the director as it was designed in an initial 'A' shape, a sign for Avengers.

READ | 'The Gray Man': Did Chris Evans punch Ryan Gosling in the face on first day of shooting?

Joe Russo, Director - Avengers: Endgame enjoys an authentic Indian Thali laid out in the the shape of Avengers ‘A’ during his visit to India #AvengersEndgame pic.twitter.com/cJD0ncTWFE

The Avengers special thali included 16 bowls filled with various delicious Indian savouries and sweets along with a few tandoori rotis.

The Russo brothers will be soon in India and this was confirmed by the duo via a video message which was posted by Netflix India on its official Twitter handle. The directors said in the clip, "Hey everyone! I am Joe Russo and I am Anthony Russo and we’re so excited to be coming to India to see our dear friend Dhanush for our new movie The Gray Man. Get ready India, see you soon."

As per a PTI report, Indian fans will be getting a chance to interact with Joe Russo as the Avengers: Endgame director will be flying to the country to kick off his Asia Pacific promotional tour for the film.

Some great news from the cast of #TheGrayMan! 🎉
The @Russo_Brothers are coming to India to give you a taste of the film, along with @dhanushkraja. Buckle up and stay tuned 💥💥💥@AGBOfilms pic.twitter.com/4kJ5ZbqtIj

In the short video, Dhanush also talked about his experience of working on the much-anticipated action thriller, The Gray Man, as he said, "It was incredible. This movie is a roller coaster, it has everything, action, drama, pace and a big chase. I am very grateful that I got to do a modest role in this movie full of incredible people (sic)".

READ | 'Ranveer Vs Wild With Bear Grylls' to 'The Gray Man', what to watch on Netflix in July?

READ | 'The Gray Man' star Dhanush opens up on bagging Hollywood project during LA screening
READ | The Gray Man creators Russo Brothers announce their visit to India; 'We are excited to...'
First Published: 11th July, 2022 16:18 IST
SUBSCRIBE TO US