Zendaya to lend voice for 'Space Jam: A New Legacy' and will be heard as Lola Bunny. Here is more information about it, read on to know details.


Hollywood actor Zendaya has been roped in to lend her voice for the upcoming film, Space Jam: A New Legacy. The Emmy winning actor has been signed for the role of Lola Bunny. The news was announced by the official Twitter handle of the film as they welcomed her on board.

Zendaya joins the cast of Space Jam: A New Legacy as Lola Bunny

The official Twitter handle of the film announced on Saturday that they welcome Zendaya to the film. The tweet read, “Welcome to the Jam” and tagged the actor in the post. The trailer of the film released on the same day as the announcement was made. Check out the tweet about the same below. 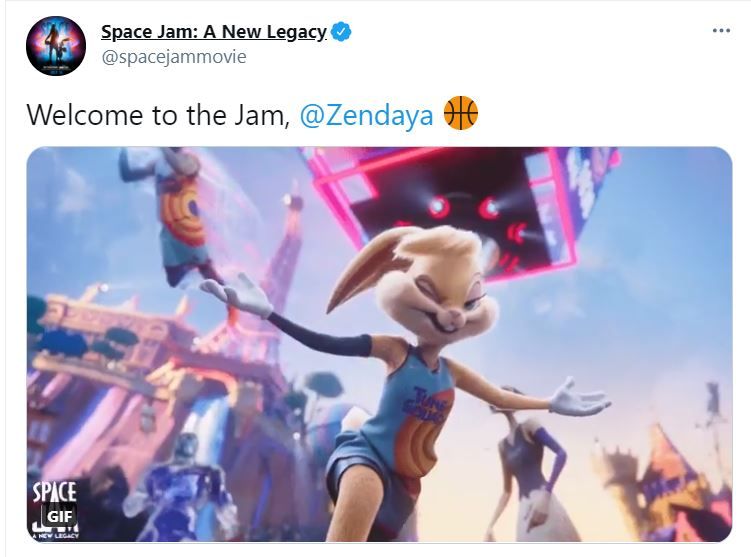 A number of netizens online left their comments and reactions about the update. Several Twitterati wrote in the comments that “Zendaya can do anything” and some wrote that they love the actor. Other netizens posted pictures and GIFs of the actor as they left heart and kiss emoticons in the comment section of the post. Check out some of the reactions by netizens below.

READ | Zendaya says one shouldn't be intimidated in H'wood: 'Ask for things you are worthy of'

I loved the voice actress in the first Space Jam... but you know, I LOVE Zendaya. So I’m here for it ðŸ™ŒðŸ¼

Zendaya can do anything

Space Jam: A New Legacy is a Malcolm D Lee directorial film and is a sequel to the Michael Jordon-led cult classic Space Jam which had released in the year 1996. The sequel follows NBA superstar LeBron James as he is thrust into a digital space known as The Serververse after his son is taken away by an evil algorithm known as Al-G Rhythm, played by Don Cheadle.

The plot follows how James teams up with the Looney Tunes characters and competes in basketball against the algorithm’s Goon Squad, in an attempt to save his son.