As 'Meenakshi Sundareshwar' released on Netflix, many netizens reviewed it. The Sanya Malhotra-Abhimanyu Dassani film was praised, but Tamilians were unhappy. 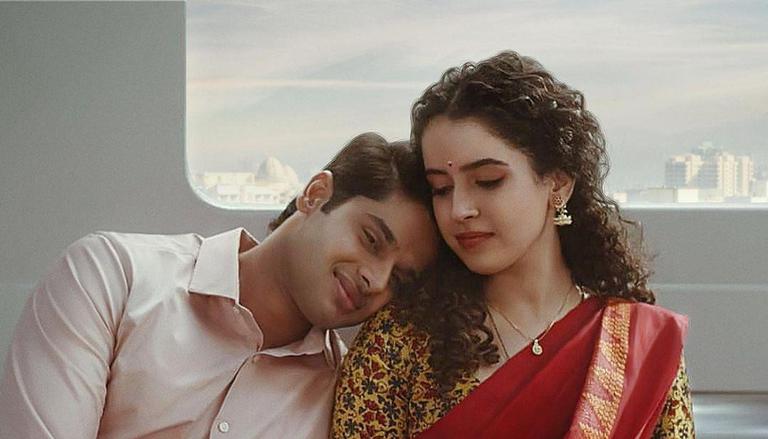 
This weekend, the focus was on a megastar, Rajinikanth's Annaatthe, a multi-cop franchise by a successful director, Sooryavanshi, and the multi-superhero international venture, Eternals. Amid these big names, OTT platforms still haven't lost their charm as star-studded film Meenakashi Sundareshwar too released on Friday. Unlike the grand celebrations at some theatres to mark the release of the aforementioned biggies, this romantic comedy was released on Netflix.

Many watched the movie on the first day itself and took to Twitter to share their views. The Sanya Malhotra and Abhimanyu Dassani-starrer was loved by many viewers, but some, especially those hailing from Tamil Nadu, seemed to have a problem with it.

Meenakshi Sundareshwar was praised with terms like 'Lovely movie with beautiful message', 'must watch', 'what a movie', 'beautiful film', 'sweet film' and more.

One netizen pointed out the arranged marriage setting depicted in the movie and of the ups and downs of their relationship. Another liked the 'nice story' and felt the characters were relatable. The direction by Vivek Soni, cinematography by Debojeet Ray and the background score too found a mention with Soni being credited by one for making the film a 'winner.'

Sanya Malhotra was praised too, with words like 'glowing star', 'earnest performance' and one praised her expressions. Abhimanyu, who is the son of Maine Pyar Kiya actress Bhagyashree, impressed some with terms like 'extraordinary work' and made one netizen his fan, while another felt he was 'on his way to stardom.'

Must say what a movie .. if you guys haven't watch it than do watch it ..It's worth watching .. #MeenakshiSundareshwar pic.twitter.com/pqhx9GYaRA

#MeenakshiSundareshwar is such a beautiful film and depiction of contemporary arranged-cum-love marriage - a take on newlywed, their struggles, understanding, longing for eachother and journey of building a life-long partnership ❤️

I usually don’t pick movies from romance category but I really enjoyed #MeenakshiSundareshwar movie on Netflix. Such a nice story. 🤩

#MeenakshiSundareshwar is such a cute movie to watch. Decency on the way 😍✌️🎊@Abhimannyu_D way to go champ ✌️ you're making me your fan again & again.@sanyamalhotra07 whatta expression girl. 😍🤩
Must watch 🙌✌️❣️

#MeenakshiSundareshwar is a sweet film.

Brilliant background score and as usual @sanyamalhotra07 shines! @Abhimannyu_D is on his way to stardom!

However, some Tamilians were unhappy. The movie is set in Tamil Nadu and traces the story of two persons belonging to Tamil-speaking families. One wrote that it did not even 'offend well' and was a 'joke' on all fronts. Another pointed out the 'stereotypes" galore and also spoke of the 'slow pace' an 'odd tangents.'

"Can you stop making movies based on Tamilians or any south Indians for that matter? If you can't freaking do it the right way don't do it man! We have had enough of your stereotypical portrayal already!" was another comment.

Another hit out at the stereotypes like being a Rajinikanth fan, applying sandalwood paste on the forehead and more. The pronunciations and talking style of the characters did not please some Tamilians.  Have a look:

#MeenakshiSundareshwar confuses me more than anything else Beautifully shot with such a soulful soundtrack. #SanyaMalhotra in brilliant form

But a Tamil Brahmin family in Madurai speaking shudh Hindi. Stereotypes galore. Slow pace. Odd Tangents in the storyline. What did u think pic.twitter.com/AqhMoErKzS

I am from Madurai, I am a Software Engineer & I am from Tamil Nadu .#MeenakshiSundareshwar NetFlix film is no way related to Madurai or it's culture! Bride grooms wont look like that & not everyone is a Rajini fan! (1/2)

I am a bit dazed that a big studio would try to pull off a Hindi movie in Madurai and not bother correcting the Tamil pronunciations of its N Indian cast of characters. This must be cultural hubris, noh? #MeenakshiSundareshwar https://t.co/gydX58CTwr