Adnan Sami has been at his savage best as he deals with trolls from Pakistan. The music composer-singer's perfect replies have been making headlines.

Adnan Sami has been at his savage best as he deals with trolls from Pakistan. The music composer-singer's perfect replies to the negative comments from the neighbouring country, be it after the Indo-Pak cricket match, Balakot strike or Article 370 abrogation has often made headlines and rightly so. Here we take a look at the six times when the music composer-singer won the Internet with his witty replies to Pakistani trolls.

After India’s retaliatory strike against the terror camps in Pakistan in the aftermath of the Pulwama attack in February 2019, Adnan had stood up to his country by stating that the strikes were about eliminating terrorists, while laughing at the trolls’ ‘ostrich mentality.’

He had then written, "Dear Pak trolls, It's not about your egos being given a reality check today; it's about eliminating terrorists who you ‘claim’ are also your enemies! Your Ostrich mentality is laughable. By the way, your abuses expose your reality and therefore the only difference between you and a bucket of rubbish is the bucket!"

Recently, the ‘Tera Chehra’ singer was trolled on Pakistan Independence Day on August 14, for not wishing his former country for the occasion. Adnan replied that he’d wish his country, India, on its Independence Day, a day later.

READ: Adnan Sami Was Asked How He Deals With Constant Flak From Pakistanis. His Answer Is Fantastic

When the 46-year-old was later accused by a Pakistan troll of not being ‘loyal’ to his motherland, he had hit back by giving an example of the founder of Pakistan, Muhammad Ali Jinnah.

Really... Jinnah was not faithful to his motherland... What should we call him then?😉 https://t.co/BivMlau1y6

While speaking exclusively to Republic TV, he stated that the Pakistanis couldn’t tolerate the fact that he had become an Indian.

“They have a disease, they can’t face the truth. I haven’t made any wrong decision. They told me why I was not tweeting about Independence Day (August 14), I said I’ll do it tomorrow. Because my Independence Day is today (August 15), I didn’t say anything wrong or misbehaved with anyone, but people got angry, they couldn’t tolerate when I wished my fellow Indians.”

READ: Adnan Sami On Pakistan Trolls: 'They Can’t Digest That I've Become Indian, Their Beliefs About India Are Wrong'

He added, “They can’t digest the fact that I have become an Indian. Their narrative has been that Indian Muslims are treated unjustly. I have spent 17 years here, I observed what happens here and I understood that whatever they published and believe there is completely wrong. That’s how I decided that I want to be an Indian. They wonder why a person with an influential background, my father worked in the government, could leave everything and come to India. ‘Is something wrong with our country?’ they ask. Of course, there is something wrong.”

On Twitter, when another user asked him how he dealt with the constant hate from Pakistan, the musician had termed them as ‘'helpless, misguided & frustrated’ while asserting that he had forgiven them.” He wrote, “My dear, it’s okay; they’re basically helpless, misguided & frustrated about their own lives & are taking it out on me since they know I moved on. I forgive them & pray that God improves their lives. They are actually victims...Hugs.”

My dear, it’s okay; they’re basically helpless, misguided & frustrated about their own lives & are taking it out on me since they know I moved on. I forgive them & pray that God improves their lives. They are actually victims...Hugs.🙏💖🤗 https://t.co/E8H5azu3yG

Have only love for Pakistanis, but...

On Monday, he perfectly pointed out the exact problem with Pakistan, saying he only had love for the people of Pakistan, but lashed out at the terrorism and the Pakistan Army’s warmongering. He tweeted, “Just for the record, I’m NOT against d people of Pakistan. I love & respect ALL who love me. Therefore I love d ppl of Pak too. I’m against Terrorism & against d Pak Army which has provoked wars wt both its neighbours & destroyed democracy & the mindset of the ppl of Pak.” 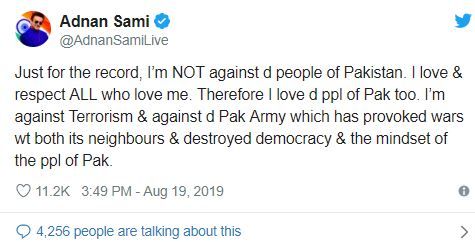