Adnan Sami 'jamming to old favourite' Kishore Kumar classic left netizens awe-struck. They replied that they had got 'goosebumps' and termed it 'soul-stirring.' 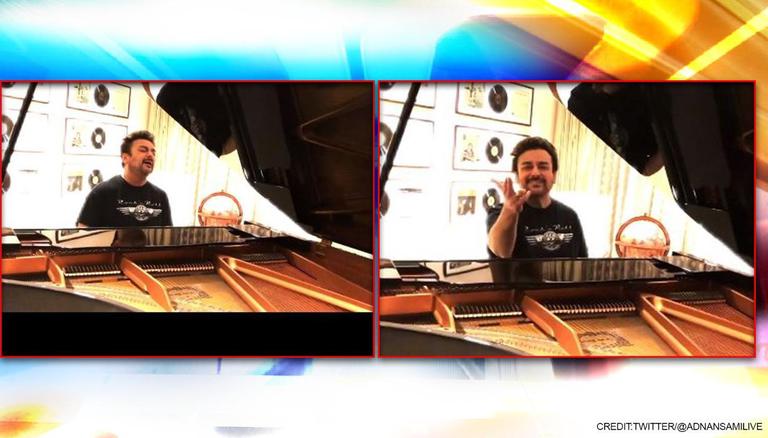 
Adnan Sami might have been missing from the music scene for over a year now, but a glimpse of what fans have been missing from him occasionally comes up on Twitter. The singer-music composer’s rendition of the classic Hum Bewafaa was a reminder of this talent. His version turned out to the perfect treat for those missing his music as fans went gaga over his cover of the RD Burman creation.

Adnan posted a video from home on social media of him ‘just jamming to an old favourite’. The Tera Chehra star had his piano as his companion and its partnership with his voice created a much-needed impact. The singer was seen being completely immersed in the melody while singing, as he crooned much slower than the original sung by Kishore Kumar and extended the ends of the lines.

His music-based wall in the background was a beautiful addition to the feeling.

Netizens were left awe-struck by Adnan’s cover. One wrote that he got ‘goosebumps’ upon hearing the song. Words like ‘beautiful', ‘song of the day’ were some of the other comments on the video. Another replied that he had made the lyrics more soulful with his ‘melodious magic’ and ‘soul-stirring’ and were the other comments.

Gave me goosebumps after watching you with your piano! & ofcourse with your beautiful voice!!! Made my heart melt!! Love you sir! May god gives you more heights! ❤️💕😍🤗🥰🙏 you are truly truly blessed with your voice! ❤️ love you so much! Always live long! & keep smiling! ❤️😁

Beautiful voice, what a control you have on sur. Amazing ❤️

You have made its "lyrics"...more soulful💖 through your melodius magic...
Sir I want your one album to be released...just like Tera Chehra...! Will you?

And just like that....it becomes my song of the day!! Soulful...beautiful

Adnan , it's like taking us back to those soul stirring old memories of "Shalimar " ! Transported me to those soul lifting beautiful song ! U made lyrics more melodious ! Wonderful !

While this was an evergreen rendition from the 1978 film Shalimar from another artist, Adnan had similarly crooned his own Noor-E-Khuda from My  Name is Khan. This was on the occasion of Shab-e-Barat. Netizens had reacted in a similar way then too.

Meanwhile, on the professional front, Adnan is yet to come out with any track since his Tu Yaad Aaya. That song itself had been termed as a ‘comeback’ after he had not released any track in Hindi for over five years. Tu Yaad Aya has crossed 32 million views on YouTube.

His award for Outstanding Contribution to Music Industry this year at the Dadasaheb Phalke International Film Festival Awards was one of the highlights of his career.