American Grammy-winning singer, Billie Eilish, took to her Instagram to tease her upcoming song 'Happier Than Ever' with her 82.1 million followers.


Fans of the American Grammy-winning singer Billie Eilish have been waiting for her new single ever since her last song Lo Vas A Olvidar released in January 2021. Four months later, Billie Eilish has a surprise for her fans as she teased a new single through Instagram.

Billie Eilish took to her Instagram to tease her upcoming song Happier Than Ever with her 82.1 million followers. She shared a small video snippet in which she was sitting in a shell-shaped chair. She stunned in a blonde hairdo as she turned to look at the camera. In the background, her upcoming song was being played with the lyrics, "When I'm away from you, I'm happier than ever."

Fans react to teaser of Happier Than Ever

Fans have been drooling over Billie Eilish's latest Instagram post. The post received over 14 million views and 91 thousand comments on Instagram. Fans of the singer were thrilled as they shared their excitement in the comment section of the post. A fan wrote, "WHO’S CRYING WITH MEEEEE?😭😭😭😭", while another one wrote, "NOOOOO WAIIITT IMMA CRY". Here's how her fans reacted to the teaser. 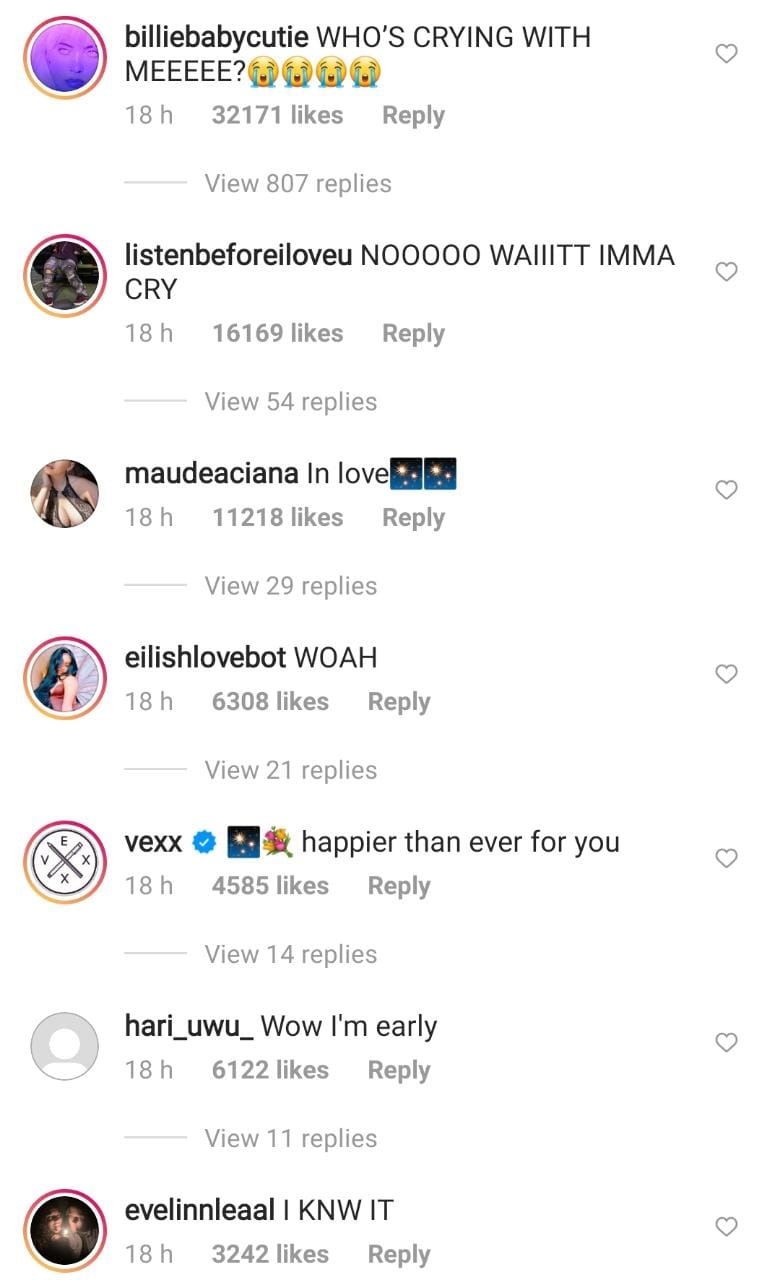 About a week ago on April 20, 2021, Billie Eilish teased her fans with a photo. She posted a picture on Instagram and wrote, "things are comingggg" in the caption. Take a look at the photo she posted.

READ | Billie Eilish to Priyanka Chopra; Celebs who made headlines on social media this week

Billie Eilish's song was first teased in her documentary, Billie Eilish: The World's A Little Blurry that released in February 2021. Billie Eilish's brother Finneas was harmonising the song as they discussed its concept. She also sang the next line of the song which was, "Wish I could explain it better. Wish it wasn't true". A fan of the singer posted the video clip from Eilish's documentary. She wrote, "I FOUND THE CLIP I FOUND THE CLIP #HappierThanEver #BillieEilish FINNEAS WAS PLAYING AND HARMONIZING WHILE BILLIE WAS SINGING ‘Happier Than Ever’!!!!!".

I FOUND THE CLIP I FOUND THE CLIP#HappierThanEver #BillieEilish
FINNEAS WAS PLAYING AND HARMONIZING WHILE BILLIE WAS SINGING ‘Happier Than Ever’!!!!! pic.twitter.com/v77ryFRTuD

Another Twitter user wrote, "Listening to the 15 second “happier than ever” clip on repeat, imagining what the rest of the song (and album) is going to sound like #BillieEilish #HappierThanEver". Twitter was flooded with fans' reactions to the 15-second teaser of Happier Than Ever. Here are more such tweets about the new teaser.

Listening to the 15 second “happier than ever” clip on repeat, imagining what the rest of the song (and album) is going to sound like @billieeilish #BillieEilish #HappierThanEver pic.twitter.com/nSFW2Eukmi

Nooooooo it's illegal to look this type of stunning. QUEEN you rockkkkkkkkk can't wait for the album release😉😄😃 #BillieEilish #HappierThanEver https://t.co/w9tyj0CJYP

the way she is looking into my soul tho. sheeesh 😍 #HappierThanEver pic.twitter.com/vsU5tjBjZU