Bobby Shmurda To Be Released On Feb 23, How Long Was He In Prison? Find Out

New York rapper Bobby Shmurda has been trending on Twitter ever since the news of his release surfaced. Find out how long was he is prison.

The New York Rapper Bobby Shmurda who was sentenced to seven years in prison in October 2016 after pleading guilty to conspiracy and weapons possession is set to be released very soon. Shmurda whose real name is Ackquille Pollard was denied parole back in September 2020, hence fans on Twitter were thrilled when the news of his release surfaced. The rapper was initially ordered to serve his maximum sentence up to December 11, 2021, in prison. Find out for how long was Bobby Shmurda in prison?

the circle of life.

Bobby Shmurda could’ve been a free man, but he decided to take 7 years, so that Rowdy Rebel could receive 7 years instead of 12 years. Throughout his time in prison he sued the NYPD & said he felt targeted due to his music.

Let this remind you of how twisted the system is.

Daft Punk splitting up the day Bobby Shmurda gets out ðŸ‘€ pic.twitter.com/nubHw3EGZh

Read | Bobby Shmurda's Net Worth: How much is the famous New York rapper worth in 2021?

How long was Bobby Shmurda's sentence?

According to a report in The NewYork Times, the 26-year-old New York rapper has spent a total of six years in jail. The rapper was arrested in 2014, just after he signed to Epic records. Following his conditional release, Shmurda will be on parole until 2026. Upon his release on February 23, Migos rapper Quavo will be on hand to pick him up from prison. 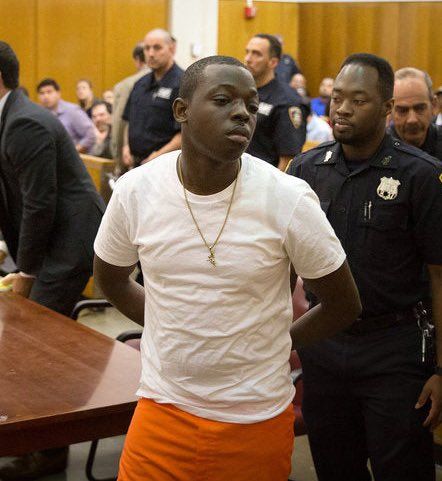 In a recent interview with Billboard Magazine, Quavo stated that he was thrilled to pick his longtime friend up from prison. The Rapper’s mother, Leslie Pollard also revealed to the magazine that after his release the family plans to enjoy an intimate meal. He is then planning to devote his time solely to music, while regularly checking in with his parole officer until 2026. Over the weekend, Pollard took to Instagram to post a clip of Rowdy Rebel'sComputers’ music video featuring her son Shmurda.

Why was Bobby Shmurda in prison?

An older report in the Billboard magazine reveals that on June 3, 2014, Bobby Shmurda was arrested by the New York Police Department and charged with a felony for criminal possession of a weapon. The New York police alleged that the young rapper was flashing a gun in an apartment when the cops arrived to investigate. The cops also added that he tried to hide the weapon on the couch.

Following this, Bobby Shmurda was charged with conspiracy to commit murder, reckless endangerment, and drug & gun possession. The report further stated that Shmurda was held on $2M bail. As matters got worse, another report surfaced in 2016, this time in the New York Times. The report claimed that the American Rapper was accused of being a leader in GS9 or G Stone Crips which is a violent street gang in East Flatbush, Brooklyn.

Why is Bobby Shmurda famous?

Ackquille Jean Pollard also known as Bobby Shmurda, rose to fame after his song Hot Ni*** was released in 2014.  The report in Billboard reveals that it peaked at number six on the Billboard Hot 100 in 2014. His debut EP, Shmurda She Wrote, was released on November 10, 2014. However, just after his career was beginning to take off the rapper got entangled in criminal conspiracy cases.

Read | Who is Bobby Spencer in Netflix's 'The Crew'? Is he based on a real person?