BTS Comments On Collaboration Rumours With Justin Bieber; Says, It's "not A Dream"

The BTS recently appeared on a chat show together and talked about the alleged rumour of the members collaborating with popular singer Justin Bieber. 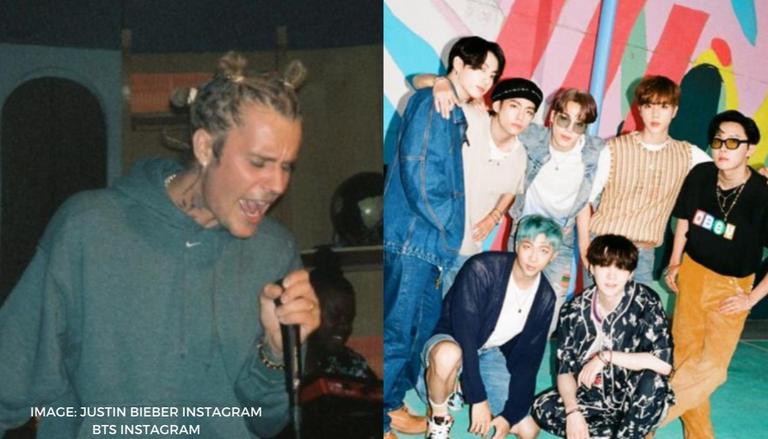 
BTS recently made an appearance together where the members opened up about their latest songs and how they feel when they wait for people’s reactions to their work. As BTS and Justin Bieber's collaboration rumours have been surfacing on the internet, the members were asked to shed light on the same to which they responded on how the collaboration was ‘not a dream’ and also asked Justin Bieber to call them.

According to reports by Zack Sang Show, BTS was a part of the chat show and candidly talked about a lot of things including its latest song Butter and also about its alleged collaboration with Justin Bieber. When the host of the show talked about the Justin Bieber collaboration rumours and asked the members whether it was a dream, one of them reacted that it was not a dream. He then added that they were in the same company and referred to them as ‘company friends’. He also stated that this hadn’t happened yet and asked Justin to call them if he watches their interview and even asked him to come to Korea and said ‘let’s go apples, let’s go Butter’.

They were also asked about what other genres they wanted to explore, to which they all first shared a laugh and then Jin stated that they were doing something fun this time that everyone could enjoy. The members continued that they could try classical music while another one responded by doing something related to the popular song on social media, Baby Shark.

BTS members were also asked about their process when they were creating their song Butter to which J-Hope stated that RM helped them a lot with pronunciation and other things and mentioned that the key of the song was too high. Even Jimin shared that it had been a while since they had a fun song like this and that he was able to use voices and tones that he hadn’t used for a while which became a learning experience for them. He also revealed that Jungkook helped him a lot and it was a real learning process for him. They also mentioned that it was a new challenge for them whenever they worked on a project together. They looked forward to people’s reactions wherever they come up with their new project.