BTS 'Permission To Dance' Challenge Taken Up By Elton John; The Singer Sends Love To ARMY

Singer Elton John recently took the BTS Permission To Dance challenge. The singer dropped video on his official YouTube channel, where he can be seen grooving. 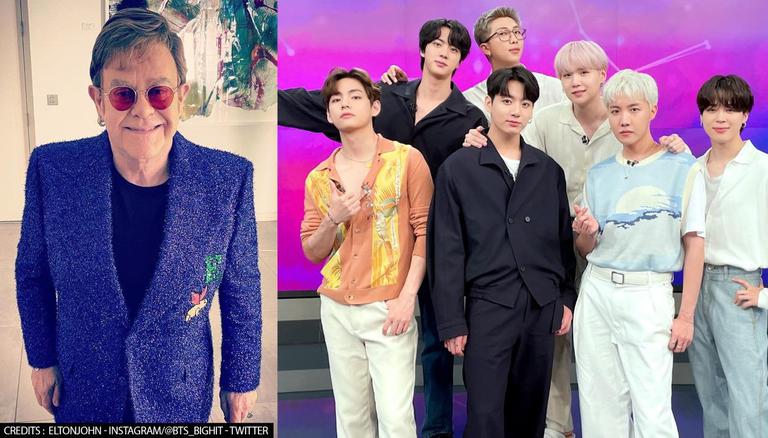 
Singer Elton John recently took the BTS Permission To Dance challenge. The singer dropped a video on his official YouTube channel, where he can be seen grooving to the song and performing the sign language steps. Elton also shared a post on Twitter where he gave a shout out to the BTS ARMY. Apparently, Elton's name was also featured in the lyrics that goes- "When it all seems like it's wrong, Just sing along to Elton John."

🎶When the nights get colder, And the rhythms got you falling behind 🎶 @BTS_twt #permissiontodance pic.twitter.com/3pDhkOiY35

Elton John took to the micro-blogging site and dropped a video featuring himself. In the video, John can be seen expressing gratitude to the BTS ARMY. He said, "Thanks BTS. Love to the ARMY." He captioned the post, "When it all seems like it’s right, I sing along to @bangtantv #permissiontodance." He added, "When the nights get colder, And the rhythms got you falling behind @BTS_twt #permissiontodance."

Earlier, BTS rapper RM also showed his support to Elton John on Twitter. He also posted a video of himself on the verified BTS Twitter handle. He wrote, "When it all seems like it’s wrong Just sing along to @eltonofficial #PermissionToDance."

When it all seems like it’s wrong Just sing along to @eltonofficial 🎤 #PermissionToDance pic.twitter.com/4IBwtbXV1S

In an interview with Jaeki Cho for Amazon Music, BTS members recently talked about their success, their definition of masculinity, BTS ARMY, and several other things. They were asked if they ever expected to have such a huge fan following, to which BTS leader RM answered, "When you are in the eye of a hurricane, you can’t find out. When the hurricane goes away, we’ll find out." Jaeki Cho highlighted that it is not often that K-pop bands survive this long and how they still manage to flourish. RM replied, "When we first started, I was honestly concerned about how we’d last for seven years being such different people, but I think the differences turned into a synergy for us to fill in the gap for each other."