BTS To Collaborate With Pharell Williams For Next Album 'Phriends', Rapper Shares Details

After their military enlistment news shocked fans, K-pop band BTS is all set to collaborate with Hollywood rapper Pharrell Williams for next Phriends. 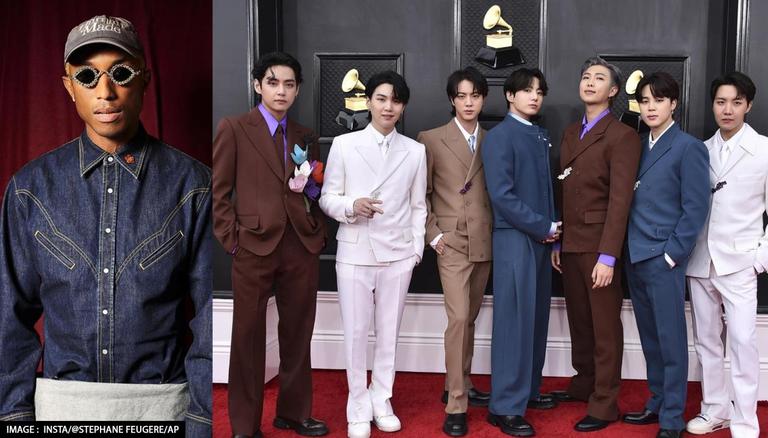 
After their military enlistment news shocked fans, K-pop band BTS is all set to collaborate with Hollywood rapper Pharrell Williams. The confirmation of the collaboration was made by Pharell during his recent conversation with BTS's RM where they chatted about music, life, and more.

During the conversation, Pharell also revealed the title of his upcoming album, Phriends Volume One. This new development comes after RM’s agency confirmed his solo debut. The singer who is currently busy with the preparations of his solo music will reportedly release the same on November 25.

The major revelation about their collaboration was teased by Pharell when RM asked him about his upcoming projects. While spilling the beans about the same, the Come Get it Bae singer said, "Well, my project, it’s called . . . it’s [under] my name, and the title of the album is Phriends. It’s volume one. You guys [BTS] are on there, obviously. And I’m actually talking about this way more than I’m supposed to, but it’s a song from my album that [BTS] sang and it’s amazing, and I’m super grateful.”

RM confessed that he loves the song already, while Pharrell added that everyone who has heard it, has been praising him.
The American artist and producer went on to offer to work with RM on his upcoming solo album, raising the possibility of a second collaboration between the two singers. While talking of RM's new solo album which was confirmed by the agency recently, Pharell said, "I’m just going to put this out there. You said you’re 90 percent done with your solo album. But if within that last 10 percent, if you need—you don’t need me, but I mean…”

During the interview, the BTS member whose real name is Kim Nam-joon, further shared the deets about his solo track. He also mentioned how 10 years of BTS has now made them a social figure which they took after meeting US President Joe Biden. “I think I was really confused and I’m like, “What am I, a diplomat or what?" RM added.