Rapper Cardi B treated fans with adorable glimpses of her and Offset's son Wave, as the little one turned 9 months old recently. Take a look.


Rapper Cardi B treated fans with adorable glimpses of her and Offset's son Wave, as the little one turned 9 months old recently. The I Like It crooner marvelled at how her son has grown so much so fast as she wished him. In the trail of pictures shared on social media, one can see Wave clad in a cute tie and dye ensemble with a chain around his neck, while other glimpses show the little one shedding smiles for the camera.

Taking to her Instagram handle, Cardi shared heart-melting pictures of Wave and wrote, "Happy 9 months Wave !! My baby growing too fast on me." Take a look.

Dropping love-filled comments on her post, fans noted that Wave looked exactly like his elder sister Kulture Kiari. They mentioned, "Omg he looks so much like Kulture," "Why I thought that was Kulture," and "The same exact baby," among other things. 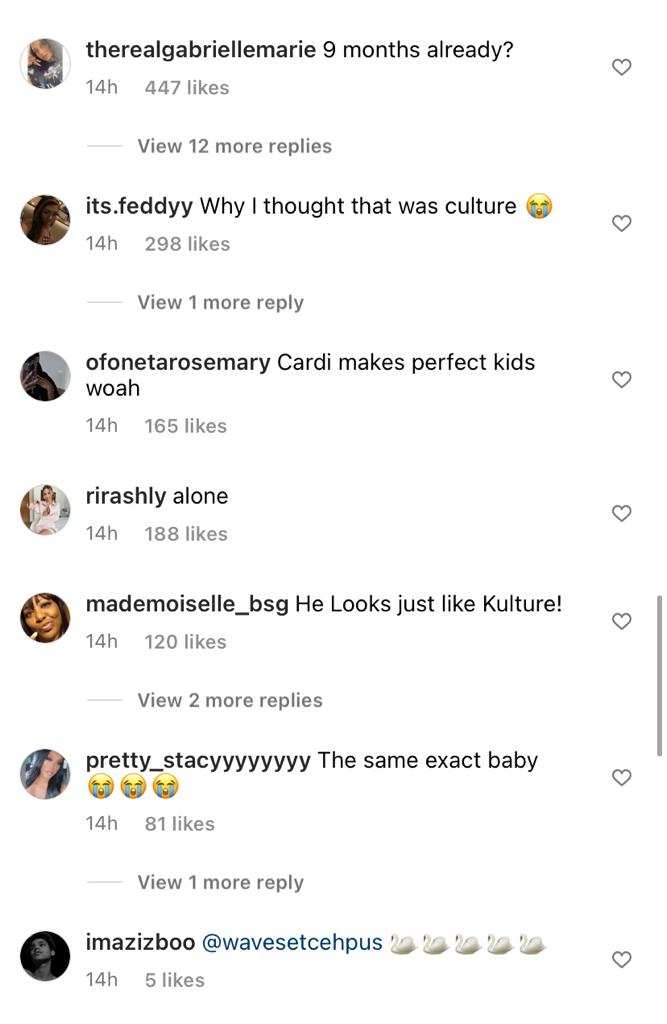 Cardi B and Offset announced the arrival of their baby boy back in September 2021 by dropping a picture alongside him in the hospital. In a statement to PEOPLE, the couple had then mentioned, "We are so overjoyed to finally meet our son," and continued," He is already loved so much by family and friends and we can't wait to introduce him to his other siblings."The duo revealed his name in April, while also dropping the first glimpse of his face.

The Grammy-winning artist then mentioned that Offset came up with Wave's name. "When Set suggested Wave, I was sold! THAT HAD TO BE HIS NAME!" she wrote. She often posts cute pictures of him on her social media handles.

READ | Cardi B and Offset introduce their son with first pics, reveal name of the baby boy

Cardi and Offset are already parents to 3-year-old daughter Kulture. Offset is also dad to daughter Kalea, 7, and sons Kody, 7, and Jordan, 12, from previous relationships. Cardi recently made heads turn with her Met Gala 2022 look by Versace. About a mile of gold metal chains was sewed in the dress, according to the designer.  Cardi B also accessorised her look with gloves made out of chains while donning a similar choker.

WE RECOMMEND
Russia's State Duma Chairman claims West 'exhausted' tools to impact Moscow's development
Cardi B and Offset introduce their son with first pics, reveal name of the baby boy
Cardi B pulls out from Paramount's 'Assisted Living' a week before filming; Here's why
Cardi B, Offset ink their wedding date on each other ahead of Valentine's Day
Cardi B-Offset & their daughter Kulture set to feature in 'Baby Shark's Big Show'