Cardi B Fires At Madonna After Note On Controversial Book Mentions Rapper, Then Reconciles

Madonna reflected on the time when she created her iconic book, Sex. Madonna said she spent a few years being interviewed by 'narrow-minded people'. 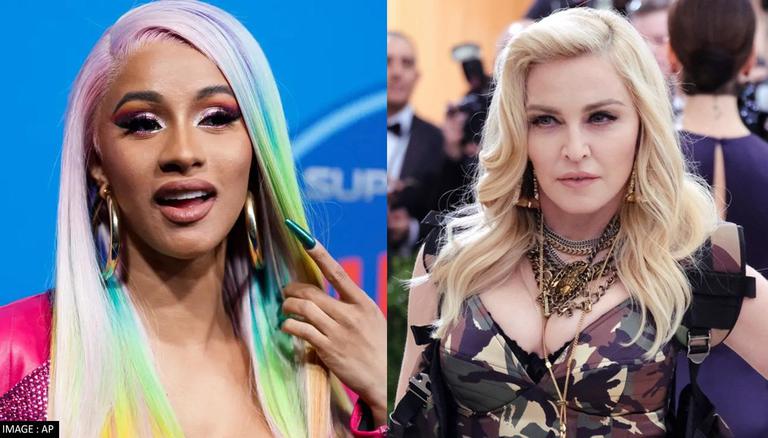 
Madonna is reflecting on the time when she created her iconic book, Sex. The singer celebrated the 30th anniversary of her 1992 controversial book by hitting out at those sex-shaming her and mentioning celebrities including Cardi B, Kim Kardashian & more, to share how it paved the way for stars of the next generation.

"Thirty years ago I published a book called S.E.X. in addition to photos of me naked. There were photos of men kissing men, women [sic] kissing women, and me kissing everyone. I also wrote about my sexual fantasies and shared my point of view about sexuality in an ironic way," said the artiste.

Madonna said she spent the next few years being interviewed by 'narrow-minded people' who tried to shame her for empowering herself as a woman.

"I was called a w***re, a witch, a h**etic and the devil. Now Cardi B can sing about her WAP. Kim Kardashian can grace the cover of any magazine with her a** and Miley Cyrus can come in like a wrecking ball. You're welcome b—es.......," she further wrote.

Cardi B reacts to Madonna's statement

Soon after Madonna released the statement, Cardi B headed to her Twitter handle and penned a long note and referred to the Madame X artist as her 'real-life idol'. "I literally [paid] this woman homage so many times 'cause I grew up listening to her… she can make her point without putting clown emojis and getting slick out the mouth. These icons really become disappointments once [you] make it in the industry. That's why I keep to myself," tweeted Cardi B.

Though the tweet has now been taken down, the I Like It crooner wrote in one of her tweets, "I talked to Madonna …It was beautiful ….Have a great day and drive safely yalll."

I talked to Madonna …It was beautiful 🥲….Have a great day and drive safely yallll😘