Pop star Dua Lipa took to Instagram and penned a gratitude note after being honoured with Albanian citizenship by the President Bajram Begaj. 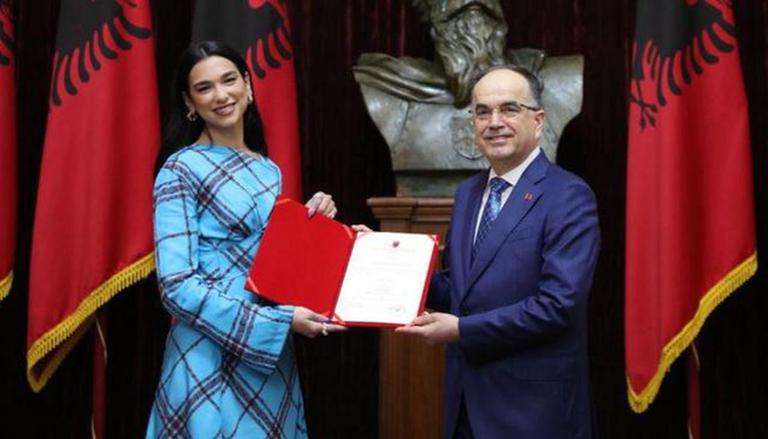 
Pop star Dua Lipa has been honoured with Albanian citizenship by the President of Albania, Bajram Begaj. The singer was credited with spreading Albanians’ fame internationally through her music, with the President mentioning that she has made the country 'proud' with her success and participation in social causes. Dua shared glimpses from the citizenship oath ceremony at Tirana city hall, thanking the President and Mayor Erion Veliaj for the honour.

Taking to her Instagram handle, the 'Levitating' hitmaker shared a series of photos and videos from the special occasion and mentioned, "Thank you President Bajram Begaj and Mayor @erionveliaj for this honour ~ got my Albanian citizenship!!"

Happy to give the one and only @DUALIPA the decree of Albanian citizenship. She has made us proud with her global career and engagement in important social causes. pic.twitter.com/B9qYbrfywA

“I will be an Albanian with papers too,” Dua said before she took her citizenship oath, as per The Guardian. She added, "It is an indescribable great joy with such acceptance, love, and everything.” For the unversed, the singer was born to immigrant Albanian parents Anesa and Dukagjin Lipa from Kosovo. She started singing at the age of 5 and was heavily influenced by her father, Dukagjin Lipa, a former member of a rock band.

Meanwhile, the singer is now all set to come out with her third studio album. While there's no official release date, it will reportedly drop in 2023.