Dua Lipa To Collaborate With These Indian Artists For 'Levitating' Remix; Watch Video

Singer Dua Lipa will collaborate with noted Indian artists on the official Indian remix of 'Levitating'. Read along to watch teaser and find out more about it.

Grammy Award singer Dua Lipa will collaborate with three Indian artists on the official Indian remix of her hit song Levitating. Indian playback singer Sukriti Kakar took to Instagram on Thursday to reveal the news where she will be joined by two other artists - Amaal Mallik and Prakriti Kakar. The Indian remix version of Levitating will release on March 26.

Sukriti Kakar wrote on Instagram, "Dreams do come true! We are SO EXCITED to announce our collaboration with the ONE AND ONLY & our FOREVER FAVOURITE @dualipa on the official Indian remix of #Levitating! @outdustry @warnermusicindia." She added, "If you know us, you know how much we love her and her music since the beginning, so this is SURREAL With this talented bunch..Let’s go @amaal_mallik @prakritikakar @kunaalvermaa @roochay". Take a look at her post here and see what fans and followers reacted to the announcement below. 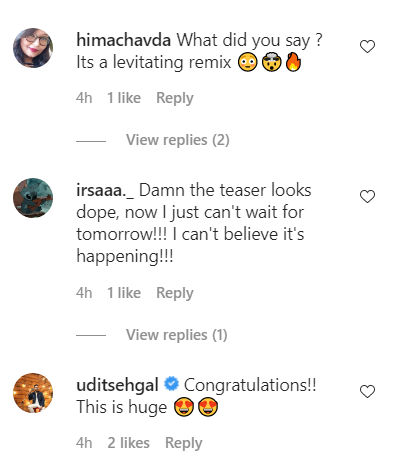 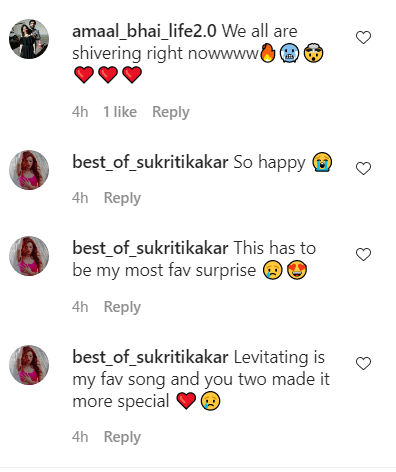 More about Levitating by Dua Lipa

Levitating is a song from Dua Lipa's sixth studio album Future Nostalgia (2020) which is written by Lipa, Clarence Coffee Jr., Sarah Hudson and Stephen Kozmeniuk. The song is an electro-disco track with a retro-themed R&B vibe to it. The lyrics describe the notion of "levitating" while falling in love. The song also has several outer space references. The first remix of the song was by American DJ, The Blessed Madonna featuring Madonna and Missy Elliott and was released to critical and commercial success on August 13, 2020. The second remix featuring rapper DaBaby was released in the same digital formats on October 1, 2020, on the bonus edition of Future Nostalgia.

The song and its remixes overall have received critical and commercial acclaim, with Levitating reaching number 5 on both the UK Singles Chart and the US Billboard Hot 100. The release was followed by two music videos; one for The Blessed Madonna's remix which has a theme of "love conquers all", while the second one was DaBaby's remix where many Tik Tok users featured in the music video.