EXO's 'Don't Fight The Feeling' Review: The Song Has A Futuristic Feel To It

EXO's Don't Fight the Feeling released on June 7. The song was one of the most awaited ones and is a treat for all the EXO fans. Here's a review of it. 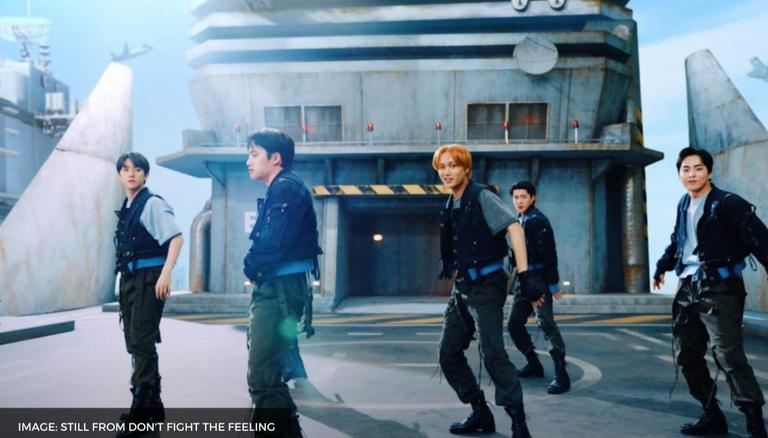 
The Korean boyband EXO released their new single Don't Fight The Feeling on June 7, 2021. The music video is set up on an aircraft carrier. EXO's new music video marks the comeback of D.O. and Xiumin and Chinese member Lay. Here's what we think about the brand new music video of the boy band.

A look at EXO's Don't Fight The Feeling song review

The song begins with a few visuals from the space. The boy band is introduced in the next scene where they are seen performing on an aircraft carrier. Each one of the artists has sung a few lines making their comeback after a long time. In the chorus, all seven of them are seen doing the hook step in their gothic military outfits. In the background, one can spot several aircrafts taking off. The visuals in the video with all the boys in their rugged outfits complement the motivational song. The initial scenes look intense as they seem to be heading on a space mission.

The chorus of the song says, "Don’t fight the feeling, Follow your instincts, babe." They eventually land up being in a spaceship where they're seen performing on it with the extra dancers. The spacecraft is called EXO Planet. The song also has a rap sung by Sehun and Kai. They have a dance party on the spaceship with fancy lightings. In the party scene, the boys change into designer party outfits. The sci-fi take on the song makes it even more innovative. The quick choreography suits the fast pace music and boys have managed to nail the routine.

More about the EXO members

The EXO members include Xiumin, Suho, Lay, Baekhyun, Chen, Chanyeol, D.O., Kai and Sehun. Lay Zhang is a Chinese member amongst all other Korean members. The EXO's new music video was shot after Xiumin and D.O returned from their military service. Chanyeol and Baekhyun shot the video before they left the band for their mandatory military service. The album Don't Fight the Feeling is one of their special albums as all the members featured together after a long time.