Halsey took to her Instagram and shared pics as she attended day 4 of BTS' Permission To Dance concert in Los Angeles with her son Ender. 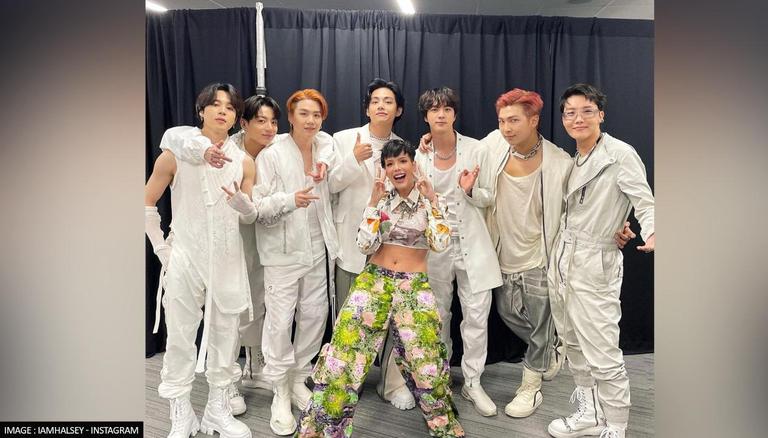 
BTS held their first-ever in-person concert Permission To Dance in over two years since the pandemic broke out. The concert was a four-day affair with performances taking place consecutively on November 27-28 and December 1-2 in Los Angeles SoFi stadium. The last day of the concert took place on Thursday and was attended by a special guest, BTS reunited with their Boy In Luv collaborator Halsey. The singer also bought her newborn son Ender and took him backstage.

Taking to Instagram, Halsey, real name Ashley Frangipane, shared a series of images as she attended BTS's Permission To Dance concert in LA. The singer also shared an adorable photo of her son Ender, as she took him backstage. The singer, 27, was in attendance with her son as the South Korean boyband performed at the 70,240 seat capacity SoFi Stadium on Thursday, the closing night of the concert. As she shared the pictures, Halsey wrote, "uncle gang, beyond words."

Earlier this week, rapper Megan Thee Stallion also surprised fans as she joined the band on stage and performed their hit single Butter remix. The rapper was set to perform with the boyband at the American Music Awards that took place on November 22. Megan took to her Twitter and announced that she had cancelled her performance due to personal reasons.

.@coldplay performing My Universe with @BTS_twt for their last concert day! pic.twitter.com/Vnrnnxs37n

Meanwhile, due to the rising cases of COVID variant Omicron in South Korea, the band will have to undergo a 10-day mandatory self-quarantine will make the group unable to attend the  Mnet Asian Music Awards. The MAMAs are currently scheduled to be held as an in-person event on December 11, 2021.

WE RECOMMEND
BTS Seoul Concert: K-Pop band announces next concert in Seoul in March 2022; Read details
BTS members Jin, J-Hope, and RM sell $8 Million worth of HYBE shares
Asia Artist Awards 2021: BTS takes home 'Song of the Year' for 'Butter'
BTS' Suga gives low-key appearance at football match; ARMY spots him in viral pics; See
BTS officially applies to defer military service: How does their future depend on it?
Listen to the latest songs, only on JioSaavn.com