Harry Styles Helps Fan Come Out During Concert In London; Says 'One Of My Favourite Shows'

English singer Harry Styles helped a fan come out during his concert in London. The video of the incident is making rounds on social media. Check it out here. 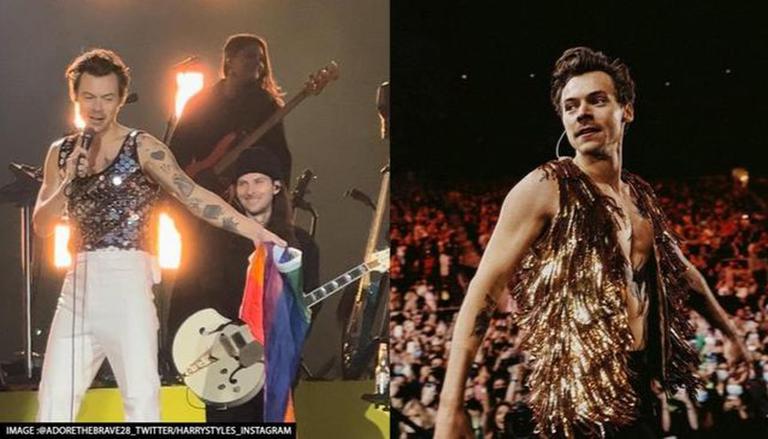 
In the London leg of his 'Love on Tour' tour, English singer Harry Styles helped a fan come out. The singer is known to be open about the subject of sexual and gender fluidity and has often translated that into his art. He has also earned himself a reputation for creating a safe space for his fans at his concerts to express themselves openly.

In a similar vein, a fan took Styles' help to come out of the closet and the former One Direction artiste did it in the most flamboyant manner, doubling the joy in the stadium. Check out the viral video below.

Amid Pride Month being celebrated, a video from the 28-year-old singer's concert on Sunday at London's Wembley Stadium is making rounds on the internet. A placard that read 'From Ono to Wembley: Help me come out' caught Styles' eye. Taking a break from performing, the singer interacted with his fans and got ahold of the sign.

Styles decided to help the fan and took the Rainbow flag in his hands and declared, ''When this flag goes over my head, you are officially out. I think that's how it works: When this sign goes over the head, you're officially gay, my boy,'' causing the crowd to erupt in cheers.

He teased the concertgoers by building up the anticipation before finally lifting the flag up and shouting, ''Congratulations, you're a free man!'' Following the concert, the Grammy winner took his Twitter to write, ''Wembley, last night was one of my favourite shows we’ve ever played. I don’t know where to begin thanking you, I’m completely overwhelmed. I’m so grateful, I’m so happy. Thank you, thank you. I love you all. See you later. H''

READ | Harry Styles reflects on possibility of One Direction's reunion: 'I think it’d be great'

Wembley, last night was one of my favourite shows we’ve ever played. I don’t know where to begin thanking you, I’m completely overwhelmed. I’m so grateful, I’m so happy. Thank you, thank you.
I love you all. See you later. H

This was not the first time that the singer helped his fan come out of the closet. Last year in November, Styles helped a fan come out to her mother who was also at the venue. Meanwhile, Harry Styles will be seen playing the role of a gay cop in the Michael Grandage directorial The Policeman. The film will open in theatres on October 21.