Joe Jonas recently took to his Instagram handle to drop a photo dump of his birthday celebration with Sophie Turner. Fans were surprised to see the last photo. 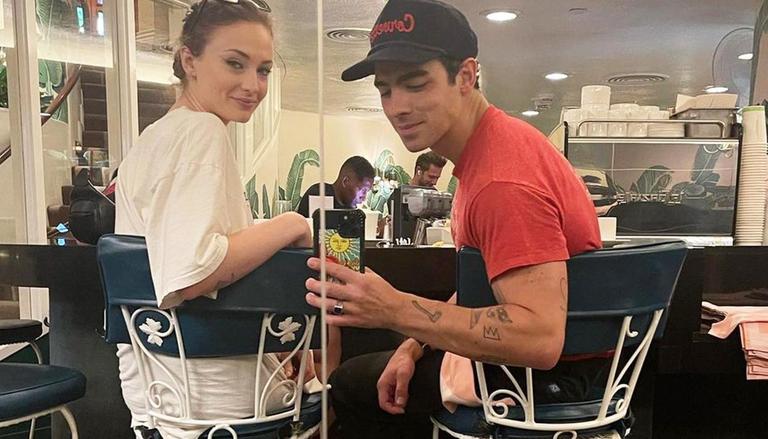 
Joe Jonas rang into his 32nd birthday on August 15, 2021. The singer received warm birthday wishes from his family and friends. However, he rather chose to celebrate his 32th with his wife and actor Sophie Turner. The singer shared several glimpses of his intimate birthday celebration via Instagram.

Joe Jonas recently took to his Instagram handle to drop a photo dump of his intimate birthday celebration with wife Sophie Turner. In the first few photos, it was seen how the Camp Rock actor celebrated his birthday. He shared a photo of him playing the piano. He also shared a snap of Sophie Turner while they enjoyed some drinks at a restaurant. The singer's birthday cake was a huge coffee mug with coffee beans pouring down from it. He also shared some photos of his birthday balloon decorations and a mirror selfie with Turner.

Among all the photos, what caught the attention of his fans was the last snap of him brushing his teeth. The last picture from the photo dump saw Joe Jonas brushing his teeth naked while Sophie Turner took a mirror selfie. A fan reacted to the photo and wrote, "Thank you for the last pic, Sophie", while another one wrote, "I'm screaming at the last photo.". In the caption, Joe Jonas thanked his fans for sending him love on his birthday. He wrote, "Thank you, everyone, for the b-day love yesterday ❤️ #32 🥳.".

READ | Joe Jonas opens up about The Jonas Brothers' breakup; says it hit him 'like a tsunami’

The American band Jonas brothers have bros Kevin, Joe, and Nick Jonas. Joe Jonas received heartfelt wishes from his brothers Nick and Kevin on turning 32. Kevin Jonas shared a funny boomerang of Joe Jonas on Instagram and wrote, "Happy birthday @joejonas love you dude!!! Dance your face off today!". On the other hand, Nick Jonas shared a monochrome photo with Joe. In the photo, the two were seen smoking cigars. He wrote, "Happy birthday @joejonas love you man. You deserve all the happiness in the world.".

Joe Jonas' wife, Sophie Turner, shared a blurred photo of the birthday boy standing amidst his birthday decorations. In the photo, Joe was seen wearing a cream coloured t-shirt with dark olive green trousers. She captioned the photo as "Birthday boy". Joe Jonas reacted to the post with a red heart emoji.