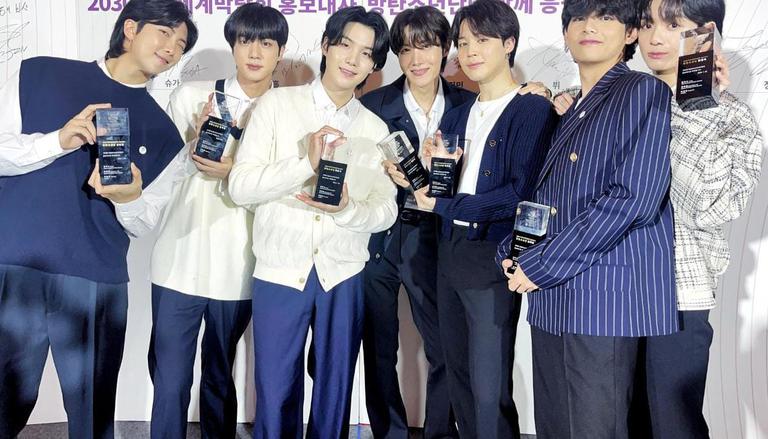 Last month, it was announced that the septet will headline a global concert to support their country's bid to host the 2030 World Expo in the port city of Busan in October.

According to a press release from the Busan Metropolitan City, the event was attended by all BTS members, Prime Minister Han Deok-soo, co-chair of the 2030 Busan World Expo, Korea Chamber of Commerce and Industry Chairman Choi Tae-won, Busan Mayor Park Hyung-joon, and HYBE CEO Park Ji-won.

Park Hyung-joon said the city of Busan has been working together with BTS as partners at the World Expo for the leap of mankind and world prosperity.

"BTS, which has made a great contribution to the development of human culture, is a global leader that best meets the purpose of the World Expo, which proposes universal values ​​that respond to the new era and presents a prospect for the future," the mayor of Busan said in a statement.

"After world-famous actor Lee Jung-jae, BTS joining as a public relations ambassador is expected to greatly increase interest in and support for the 2030 Busan World Expo, both at home and abroad," Park Hyung-joon added.

"We are BTS, the PR ambassador for the 2030 Busan World Expo," read the tweet.

The band -- comprising RM, Jin, Suga, J-Hope, Jimin, V and Jung Kook -- in June had announced that they were taking a break to focus on individual projects.

In 2021, the then South Korean President Moon Jae-in had appointed BTS as the 'Special Presidential Envoy for Future Generations and Culture' ahead of the 76th UN General Assembly.

The World Expo is held every five years and attracts millions of visitors to the host city during its six-month duration. The last World Expo was held from October 1, 2021 to March 31, 2022 in Dubai after being postponed due to the coronavirus pandemic. PTI RDS SHD RDS RDS