Playback singer Krishnakumar Kunnath, better known as KK, passed away in Kolkata on 31 March. Shreya Ghoshal, Sonu Nigam & others mourned the loss of the singer 
Krishnakumar Kunnath, widely known by his stage name KK, passed away in Kolkata on May 31 at the age of 53. Various reports suggest that the veteran singer died due to cardiac arrest. However, his autopsy will be conducted today to find out the exact cause behind his demise. In the latest development, sources informed Republic Media Network that an 'unnatural death' case has been registered in Kolkata. Reports also suggest that police protection has been increased outside the hospital as fans and celebrities are expected to arrive at the location to pay their last respects to the singer.

The entertainment fraternity as well as the veteran singer's fans are yet to recover from the shock following his untimely demise. Popular singers like Babul Supriyo, Shreya Ghoshal, Sonu Nigam, Shilpa Rao, Shankar Mahadevan and many others paid their last respects to the departed soul.

In a recent interaction with ANI, Babul Supriyo expressed grief over the late singer's demise. He said, "We started our career together, he was one of the best singers in the industry." Supriyo further mentioned that KK's voice was 'heroic' and pleasing to the ears, adding that he was one of the ‘best’ guys with a non-controversial life and career.

Supriyo also spoke about how KK used to live a peaceful life and was hardly spotted at any party. "He was a complete family man," said Supriyo. The singer-turned politician further recalled his collaborations with KK in the past for projects including Dhaai Akshar Prem Ke and said that he has a lot of memories with him.

Heart is shattered in pieces: Shreya Ghoshal on KK's demise

Expressing her grief over KK's demise, popular singer Shreya Ghoshal took to her Instagram handle and shared a picture of the late musician. Alongside the photo, Ghoshal penned an emotional note mourning the demise. In her note, she reveals that KK was one of the most 'humble, gentle and pure human being' she has ever met in her life.

The caption read "I am unable to wrap my head around this news. Numb. #KK Why! This is too hard to accept! Heart is shattered in pieces. One of the most humble, gentle, pure human being I have met in my life. God’s dear child was sent to spread love in the lives of millions of fans, friends and colleagues. Now God needed him back? So soon?! Cruel!! Cant imagine what his family is going through. My deepest sincerest condolences. His golden, soulful voice echoes in all our hearts. Rest in peace dear KK🙏🏻💔"

Sonu Nigam took to his Instagram stories and shared a clip featuring KK. Along with the video, he expressed his grief on the tragic loss. Nigam wrote " KK, MERE BHAI. NOT DONE." (folding hands emoji)

Here take a look at his story- 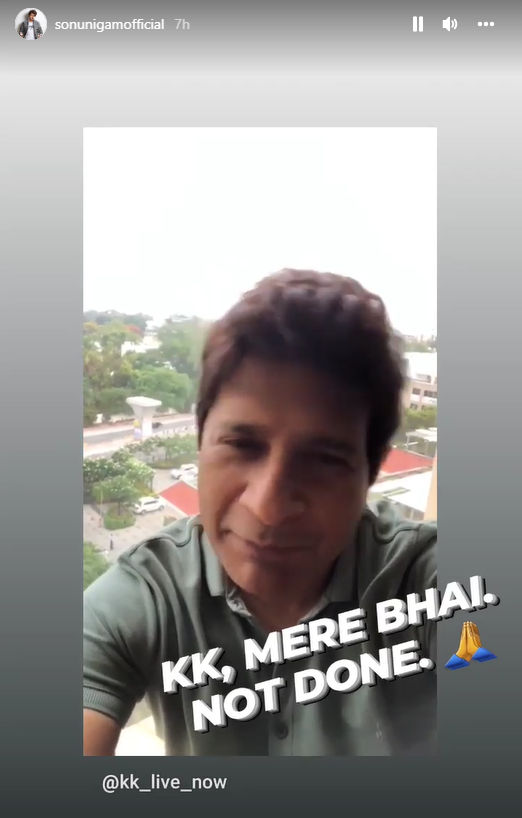 Bollywood singer Vishal Dadlani took to his Instagram handle and shared a clip performing with KK on the sets of Indian Idol Juniors. Sharing the video, Vishal Dadlani penned a heartwarming note where he mentions that he had the 'purest most beautiful heart.' Vishal wrote in the caption "We're gonna miss our friend for as long as we make music and beyond. There can never be another @kk_live_now. The purest most beautiful heart that rang clear in every note he sang. #KK"

Numb … devastated .. just can’t take this .. KK how could you just go like this .love you buddy …. Rest in peace . ‘ hum rahe ya na rahen yaad aayenge ye pal’

I don’t want to believe it that you are gone … 💔.
KK you were pure love ❤️. pic.twitter.com/vqRugQt9B4

Just can’t believe that our beloved #KK is no more. This really can’t be true.
The voice of love has gone.
This is heartbreaking. pic.twitter.com/EiAp12v5s3