'My Universe': Coldplay-BTS Collab Is Perfect Amalgamation Of Their Musical Sensibilities

The much-awaited BTS and Coldplay collaboration 'My Universe' has been finally released. The song’s lyrics are in English and Korean. Read further. 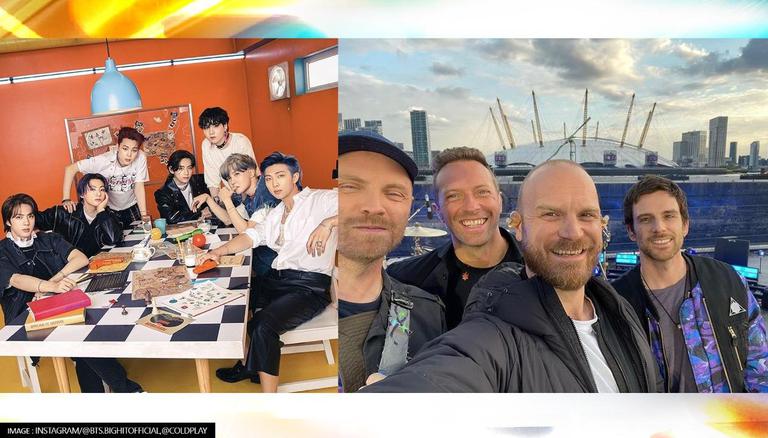 
The much-awaited BTS and Coldplay collaboration My Universe has been finally released. The song’s lyrics are in English and Korean, combining the sensibilities of both. The latest track combines the distinct sound of Coldplay infused with BTS. The single will be a part of Coldplay’s upcoming album Music of the Spheres. Members of the septet band, RM, and Suga have been credited among the songwriters.

The lyrics, “You, you are my universe and I just want to put you first. And you, you are my universe, and you make my world light up inside” are sure to create an impact in the hearts of the fans and eager listeners. The major portions of the song are sung by Coldplay lead vocalist Chris Martin along with the chorus while the BTS members sing other portions in Korean. Coldplay shared the song on Instagram and wrote, “ Coldplay X BTS // #MyUniverse // Out now // Link in bio .”

BTS, Coldplay collaboration My Universe is out now

The song will also have a music video which will be released at a later date. Fans of the two bands could not curtail their excitement and bombarded the comment section with their love. One of the fans wrote, “Damm you guys are my universe.” Another die-heart follower of the band wrote, “ my current favourite song.” A third follower chimed in and commented, “ song of the year,” while another wrote, “finally we have something in common to listen peacefully.”

READ | BTS in awe of 'secret castle' built just for them in new teaser of 'In The SOOP'; WATCH

Coldplay and BTS announced the collaboration earlier this month. Following their announcement, Chris Martin and the K-pop group were featured in a video where the two groups were seen practicing and jamming to the song. BTS recently met Coldplay band in New York earlier and posed for a picture together. The famous K-pop boy band shared the picture on Twitter and even informed about gifting them modernized hanbok. Meanwhile, BTS has released two English tracks this year. They released their song Butter in June, with the track holding the top spot on the Billboard Hot 100 chart for 10 weeks. They also released a remix version of the song with Megan Thee Stallion.

READ | Miss Universe making the most of shortest reign
READ | BTS & Coldplay meet in New York ahead of collaboration 'My Universe'; fans react