Neha Kakkar In Paris: Singer Stuns In Red As She Poses In Front Of Eiffel Tower; See Pics

Neha Kakkar is currently vacationing in Paris. The singing sensation recently sent love to her 65 million fans via Instagram from the "city of love." 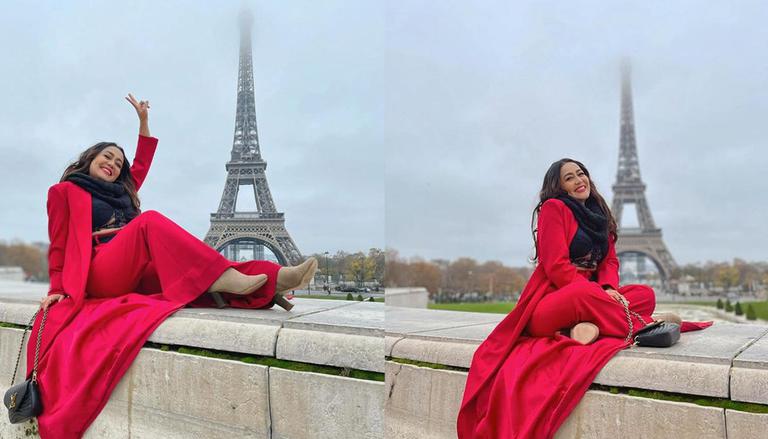 
Singing sensation Neha Kakkar is one of the most celebrated singers in the country. The singer has given back-to-back hits and chartbusters in the past few years and has also won many awards. Apart from singing, the artist is also extremely popular on Instagram. As the singer is currently vacationing in Paris, she recently sent her 65 million fans some love from there.

Neha Kakkar recently took to her Instagram handle to share a few photos from Paris. The Dilbar singer donned red coloured pants and a long jacket and paired them with a black coloured bralette. She completed her look with brown boots and also carried a black sling bag. Neha Kakkar was sitting on a wall with a view of the Eiffel Tower in the background. Through her caption, the singer sent love to her 65 million fans love from the 'city of love.' She wrote, "Sending Love from the City of Love. Paris." Her singer brother Tony Kakkar reacted to the photo and complimented his little sister. Tony Kakkar wrote, "Love you nehu.. how beautiful you looking." Neha Kakkar's fans also showered her with love and compliments, While some called her "beautiful," others sent her love. Not just Neha but her husband, Rohanpreet also posted similar pics on his social, which looks something like the couple's second honeymoon. See here:

Neha Kakkar addresses the rumours about her being pregnant

Being one of the most celebrated singers and also a social media star, Neha Kakkar has been under the limelight with netizens expressing interest in her personal life. She has often found herself surrounded by controversies and rumours but never addressed them. Getting candid about the same, the singer recently dropped a new YouTube series, Life Of Kakkars.

READ | Neha Kakkar Pens Birthday Post For Sister Sonu Kakkar; Says, 'So Much To Learn From You'

In the first episode of the show, titled Is Neha Kakkar Pregnant? begins with the Kakkar family addressing the popular rumour of Neha Kakkar being pregnant. The rumour began surfacing on the internet following Neha Kakkar's exit from Indian Idol and her sister Sonu Kakkar taking her seat. While her fans were speculating Neha was on maternity leave, the singer revealed she wanted to take a break from television. The singer mentioned she has been a part of TV for the past four years and did not feel like continuing the same.