Selena Gomez Opens Up About Britney Spears-Sam Asghari Wedding; Says 'It Was Beautiful'

Recently, days after Britney Spears and Sam Asghari's wedding, Selena Gomez opened up about the fairytale ceremony and called it 'beautiful.' 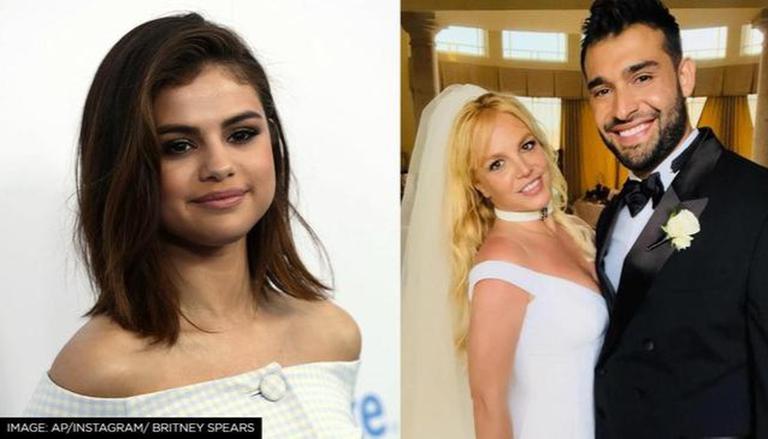 
American singer-songwriter Britney Spears and her longtime boyfriend Sam Asghari embarked on a new journey after the duo tied the knot in an intimate wedding ceremony in California on June 9. The much-loved pair exchanged vows after a whirlwind romance for over four years.

The couple's wedding was a star-studded event with several notable faces from the Hollywood film fraternity attending the lavish affairs. Among the notable names who witnessed Britney Spears and Sam's union were Madonna, Selena Gomez, Drew Barrymore, Paris Hilton, and many more. Recently, days after the ceremony, Selena Gomez opened up about the fairytale wedding and called it "beautiful."

During her recent appearance on Jimmy Kimmel Live! on Thursday night with her former Only Murders in the Building co-stars  Martin Short and Steve Martin, Selena Gomez opened up about the dreamy wedding of Sam Asghari and Britney Spears. The 29 years old singer expressed her happiness about Spear's wedding and stated, "I am really happy for her. It was beautiful."

READ | Selena Gomez opens up on her mental health journey; 'very personal for me'

Furthermore, Gomez spilt beans about the 'finger foods' that were served during the reception. After which host Jimmy Kimmel quipped, "A Thursday wedding, doesn't that usually indicate that the bride and groom are trying to get a discount?"In response, Selena laughed and said "I wouldn't know."

Earlier, Drew Barrymore took to her Instagram space and gave fans a sneak peek into Britney Spears and Sam Asghari's fairytale wedding. The talk show presenter shared some fun moments with her girl gang as she was all dolled up in a brown-coloured outfit. In the pic, the trio comprising Selena, Britney and Drew are seen sharing a sweet hug with each other.

Along with the pics, Drew also revealed in the caption that the wedding reminded her of her previous royal role as Danielle in the 1998 film Ever After: A Cinderella Story. She wrote, "What I learned from Ever After is that we must rescue ourselves and yet still want the fairy tale. And that’s exactly what Britney did! I couldn’t not be happier for her intrepid journey !!!!!!!".