T-Series’ new single 'Shanti' by Millind Gaba featuring Nikki Tamboli is out now. See what the fans had to say about the 'Shanti' song. 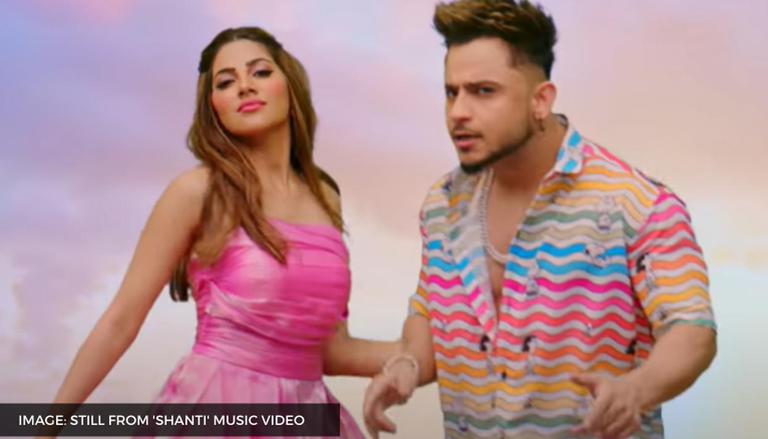 
Television personality and actor Nikki Tamboli has been featuring in back-to-back music videos in the past week and the music video of her third song Shanti released on YouTube on Tuesday, June 22. A day before its release, Nikki Tamboli had shared the teaser of the Shanti song and promised it to be a party number.

The video opens with a catchy background score and shows Milind Gaba walking up to the stage of what seems to be a party. Milind starts belting out the lyrics of the song while looking at the lyrics which are displayed on a vintage television screen placed in front of him when Nikki Tamboli is seen walking down the stairs wearing a metallic grey short one piece. Nikki's entrance catches the attention of Milind and he keeps looking at her while singing. The video then shows different visuals of the duo dressed in different outfits dancing to the song.

Penned and composed by one of Punjab's most popular music artist Millind Gaba, Shanti is a stellar party song. The music video is directed by Satti Dhillonadditional with the rap lyrics written by Asli Gold and features Millind Gaba stealing Nikki Tamboli’s heart one line at a time with complete swag. The catchy foot-tapping music along with the bright and colourful visuals in the video makes the Shanti song an out-and-out peppy and upbeat track.

Nikki Tamboli and T-series took to their social media handles to share that the video has dropped online. Talking about the number, T-series head Bhushan Kumar had shared, "With Millind in the pop-rap space you can always expect a completely entertaining track and that’s what Shanti is. Millind and Nikki Tamboli’s energy and chemistry in the song is a must-watch.”

Singer Milind Gaba also shared his enthusiasm for the number and said, "Shanti is a fun party song. The lyrics and music are catchy and the sets are really bright with pop colours. I’m sure my fans are going to love it.” Nikki Tamboli added to the same and said, “Shanti is guaranteed to have you grooving. I had a lot of fun filming this one with Millind Gaba and hopefully, everyone will love it just as much.” Let's take a look at how the fans reacted to the music video.

What a killer song ....And Nikki Tamboli grooving on Milind Gaba's lyrics is a treat to watch #NikkiTamboli loving it 😍

It's an amazing song
You are looking so 🔥
How do u manage to kill everyone with ur look Har baar? @nikkitamboli I want a reply❤😭

As usual you rocked again 🔥
Lovely song Nikki.. Those sassy moves on beats & the outfit which you wore damm so perfect
Acting, expression, dance all are 🔥🔥!

Nikki Tamboli has been a part of two other music videos released in the past week. Her song Number Likh in collaboration with singer Tony Kakkar has crossed over 13 million views on YouTube. She also featured in a Punjabi romantic track Kalla Reh Jayenga with Jass Zaildar which also received positive reviews from the audience and has crossed over 6 million views on YouTube. The actor will soon be seen in Khatron Ke Khiladi 11 and is shooting for the same in Cape Town, South Africa.