South Korean President Moon Jae-in via his official Twitter account congratulated BTS for their Artist of The Year award at the American Music Awards 2021. 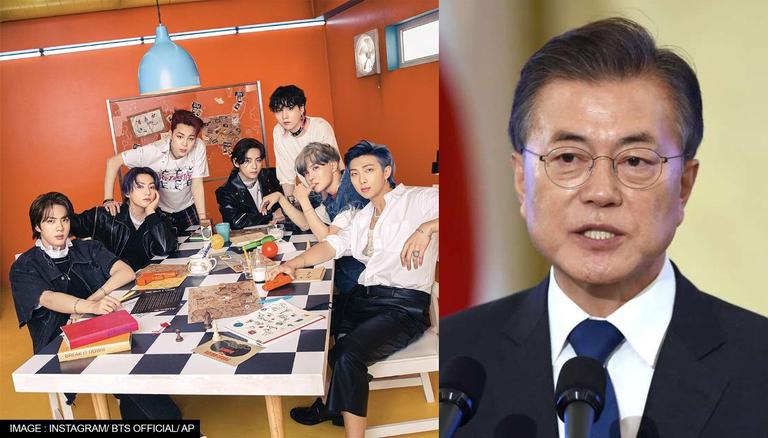 
South Korean boyband BTS recently made history as they became the first South Korean artist to win the Artist Of The Year award at the American Music Awards 2021. The band's loyal fan base Army celebrated their win, not just the fans but South Korean President Moon Jae-in also congratulated the band on their win. BTS via their official Twitter handles reacted to the President's message.

BTS scored a big win at the American Music Awards 2021 as they bagged the title of Artist Of The Year. South Korean President Moon Jae-in congratulated the band for their win and via Twitter wrote, "'A big congratulations and thanks to BTS for winning the AMAs'. We deliver the message of President Moon Jae-in. @BTS_twt #BTS." The tweet also included a note from the President.

"I would like to send congratulations and thank BTS for winning the AMA Grand Prize. Last month, the US global think-tank Center for Strategic and International Studies (CSIS), held an unusual conference on the theme of ‘Korea’s soft power’.

At the conference, world-renowned scholar Joseph Nye, the founder of the concept of ‘soft power’, praised South Korea for showing the world’s most dynamic soft power by combining unprecedented economic success and vibrant democracy. It means Korean culture is dominating the world, and it is also showing its strength in national character and diplomacy. BTS’ Grand Prize at the AMA this year confirmed that once again.

The news of this conference was only partially reported before, and the reason why I'm introducing it again is that I remembered what Joseph Nye added. He said this, ‘Even though there is no country has been more successful than South Korea over the past 60 years, so many Koreans think they are weak and lagging behind. That affects their optimism and creativity.’ What do you think everyone? Don't you think it's worth having confidence and pride now?"

BTS replied to the President's message via Twitter and wrote, "Mr. President, thank you for congratulating us on our AMAs win. We also feel a sense of pride regarding the meaningful achievement Korean pop music has made in the global music market. We look forward to our culture and artists capturing the hearts of those all over the world in a greater variety of fields in times to come!"

READ | American Music Awards 2021: See the best red carpet looks from BTS, Cardi B and others 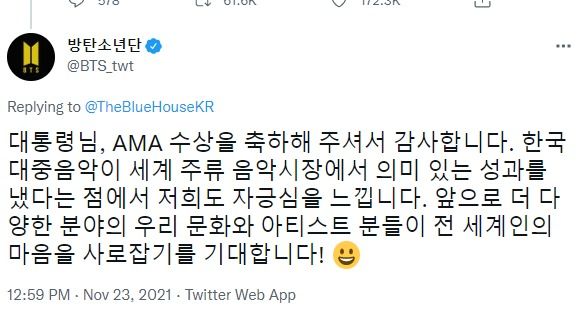 WE RECOMMEND
Will BTS attend and perform at the 2021 American Music Awards in-person this year?
Harry Styles' got new fans? Watch as BTS members sway at his LA concert
BTS' 'Dynamite' crosses 1.3 billion YouTube views; Check other tracks that hit milestone
BTS creates history by winning 'Artist Of The Year' At 2021 American Music Awards
'My Universe': BTS & Coldplay to perform first time together on stage at AMA 2021
Listen to the latest songs, only on JioSaavn.com